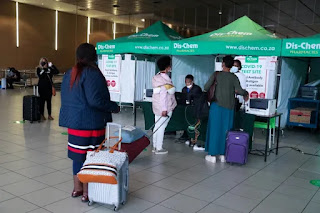 The World Health Organization (WHO) has classified a new strain of coronavirus discovered in South Africa as a “worrying variant,” prompting countries around the world to impose travel restrictions fearing it could spread shows that the new variant B.1529, which he named Omicron after a letter of the Greek alphabet, has a higher risk of reinfection compared to other highly transmissible strains.

Global authorities have reacted with concern to the emergence of Omicron, which was first found in South Africa and has since been detected in Belgium, Israel, Botswana and Hong Kong. The European Union and UK have placed restrictions on travelers from several southern African countries as researchers try to find out if the mutation was vaccine resistant, while the US has announced restrictions Similar would start on Monday.

Maria Van Kerkhove, the WHO’s COVID-19 Technical Lead, said on Friday that Omicron was designated as a “variant of concern” because it has some “worrying” properties.

“It has a large number of mutations and some of these mutations have some worrying characteristics,” Van Kerkhove said in a video posted on Twitter. She added that multiple studies are under way in South Africa and other countries to better understand the severity, transmissibility and characteristics of Omicron, however.

The WHO also said it will likely take weeks to see how effective the current COVID19 vaccines are against the variant.

Helen Rees, chair of WHO’s Africa Regional Technical Advisory Group on Immunization, said scientists still didn’t know enough about the new variant to raise the alarm and cautioned against jumping to conclusions. “The fact that we can identify changes quickly is good news.

This is good news for the world. But we have to be careful not to jump to conclusions. We need to understand a lot more about that, ”Rees told Al Jazeera from Johannesburg.

However, several countries have banned travel from various African nations since Thursday, including South Africa, Botswana, Zambia and Zimbabwe, due to concerns about the new variant.

Phaahla said during a press conference that South Africa is acting transparently and that travel bans are in violation of WHO rules and standards. Amesh Adalja, a senior researcher at the Johns Hopkins Center for Health Security, said travel bans were not an appropriate response.

“First of all, we know that travel restrictions do very little to stop the spread of COVID19,” Adalja told Al Jazeera. “Number two is punishing countries like South Africa for being open and sharing this data.