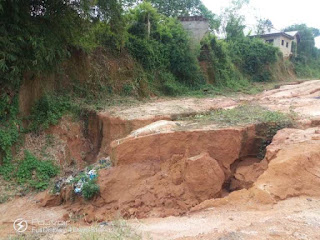 The project monitoring committee in Ikot-Nkebre community in Calabar Municipality has appealed to the World Bank not to abandon their erosion work at the Agro-field and the community road that was destroyed while reclaiming the gully in the community.

Speaking to journalists in Calabar, Mr Emmanuel Ewa, Secretary of the Ikot-Nkebre Community Association, thanked World Bank and the Nigeria Erosion and Watershed Management Project (NEWMAP) for their remediation works in the community.

Ewa maintained that all the communities in the area were united until the erosion came and divided them, making it impossible for someone to move from one community to the other.

“When the project was captured, the Agro Field community had no problem of erosion, but before NEWMAP finished drawing their plans and came to commence work, the continuous rains had devastated the area.

“What we are appealing for now is for the Agro Field community to be included in the plan for remediation work.

“This is because whatever is done in Ikot Nkebre, if the Agro Field section is not worked on, the same erosion will start from there and come back to the other communities apart from the huge division the gully has caused,” he said.

Similarly, Mr Bassey Effiong, a leader and resident of Ikot Nkebre community, said the remediation works carried out by World Bank was impressive but had not totally solved the problem of the communities.

“The road that connects all these communities had been wiped off by erosion and the remedial measures contracted to Akpaven Integrated Services and supervised by NEWMAP did not capture this challenge.

“It is just like World Bank has taken care of the erosion without caring about the interrelationship among these communities,” he noted.

In his remarks, Mr John Egu, another resident of the community said if the road connecting the communities in the area was reinstated, it will check further erosion and devastation of the area.

According to Egu, if it is left alone, the way it is at present, it means that something would have to be done later which might not be easy.

“This communities used to be like a single community, there was no division.

“It was only one road that linked all of them from the Murtala Muhammed Highway to the market, but that road has been washed away, leaving an impassable gully.