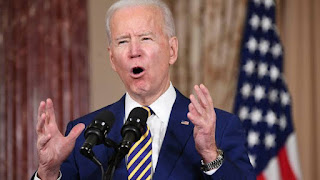 US President Joe Biden has warned his Russian counterpart Vladimir Putin of a “military escalation” with Ukraine as the two leaders held direct talks amid weeks of tensions over Russia’s military build-up near the Ukraine border.

“Greetings, Mr. President,” said Putin, in a short video clip published by the Kremlin from the virtual meeting of the two heads of state and government on Tuesday, which, according to the White House, lasted a little over two hours.

Biden said it was “good to see” the Russian president, adding that he hoped their next session would be in person.

In a statement after the call, the White House said Biden “voiced the deep concern” of the United States and its European allies “about Russia’s escalation of forces surrounding Ukraine” and made clear they “would respond with strong economic and other measures in the event of military escalation”.

Ukraine said 94,000 Russian troops were amassed along the border in the second such build-up so far this year, prompting a series of warnings from senior Biden administration officials seeking to deter Moscow to take “aggressive measures”.

Biden said ahead of the summit that he was ready to warn Putin of “high-impact economic measures” if Moscow decides to invade Ukraine, urging the Russian president instead to go diplomatic.

Putin submitted to the US president on Tuesday a demand for legally binding security guarantees that would rule out NATO expansion, the Kremlin said after the call. 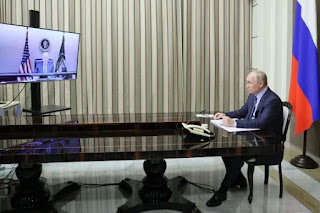 Russia is therefore seriously interested in receiving reliable and legally secure guarantees that exclude NATO eastward expansion and the stationing of offensive attack weapon systems in neighboring countries, noting that only NATO members decide when other nations join the security alliance.

“The NATO member countries decide who is a member of NATO, not Russia. And this is how the process has always been and this is how it will work, ”said White House press secretary Jen Psaki on Monday.

But Russian authorities said NATO’s growing ties with Ukraine and the possibility of the alliance deploying missiles aimed at Russia there constituted a “red line” that would not allow it to be crossed.

In 2014, Moscow annexed Crimea to Ukraine and Russia-backed separatists captured part of the territory in eastern Ukraine, sparking a conflict that continues to smolder.

Kremlin spokesman Dmitry Peskov said in Moscow on Tuesday: “Russia has never planned to attack anyone. But we have our own worries, our own red lines – President ”Putin has repeatedly said that we seek good and predictable relations with the United States. “Peskov told reporters, however, that US-Russian relations are in a” pretty dire state “and” I’m pretty sorry “.

Mark Simakovsky, a senior Atlantic Council officer and a former Foreign Ministry official, told newsmen that if the Biden government reacts to Russian actions against Ukraine, the response will be “centered on sanctions” and with the European Union vote.

But Brett Bruen, also a former diplomat and now chairman of the Global Situation Room consultancy, said there was a sense of deja vu about sanctions: “We have tried every type of economic sanction imaginable and we don’t have much to show for it,” he said. “We need to look at other instruments.