UNDERSTANDING THE CENTRAL BANKS DIGITAL CURRENCY: HOW IT WORKS 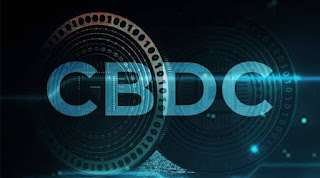 With the rise of stablecoins in recent years, particularly in 2020, Central Banks have faced increases in pressure to find an efficient electronic alternative for money.

For context, a stablecoin is a cryptocurrency token that is pegged 1:1 to a fiat currency (i.e the U.S. Dollar) or commodity, such as Gold. Stablecoins are a useful tool to gain exposure to the digital currency marketplace as a useful on-ramp vehicle without the volatility exposure of such currencies as Bitcoin or Ethereum. Stablecoins have helped pave the way for Central Banks to gain an understanding of the digital currency industry and how they can go about creating and implementing their own version of digital money.

Central Bank Digital Currencies is the process of taking an existing monetary unit and making it digital. This monetary unit, which serves both as a medium of exchange and a store of value, is a mix of new and already existing forms of central bank money, which makes it somewhat challenging to clearly define what a CBDC is. As a result, a CBDC is a digital form of Central Bank money. Each CBDC unit acts like a secure digital instrument equal to paper-based currency that exists today.

A Central Bank Digital Currency is electronic money that:

2. Potentially has greater functionality for retail transactions than using cash,

3. Contains the possibility to be interest bearing,

4. Creates a separate operating structure to other forms of Central Bank money which serves to provide a new purpose and environment

What are the Benefits of Central Bank Digital Currencies?

The reason that Central Banks are exploring the possibility of issuing their own CBDCs is driven by the success of new technology in the financial sector, the rise of the digital currency landscape, and the decline in the use of cash in the current marketplace. Additionally, included in the rise of digital currencies is the understanding and use of Blockchain technology which, among other things, assists in providing an easier method to transfer money internationally. The existing method of wiring money is expensive and takes multiple days, whereas sending money in the form of a token (whether it is a cryptocurrency or stablecoin) via blockchain technology has proven to be more efficient and less expensive.

READ ALSO; CBN eNAIRA; THE JOURNEY TOWARDS THE LAUNCH OF THE DIGITAL CURRENCY 2021

Many speculate the benefits of issuing a CBDC as Central Banks continue to experiment with this technological advance, but there are four potential key advantages that a CBDC can provide:

• The use of physical cash has been significantly declining in recent years as more consumers use cards and applications to payment settlement. If a CBDC were to be issued and recognized as legal tender, then the decreased use of cash could help alleviate some of the negative use cases for cash (tax evasion, money laundering, illegal transactions, etc.)

• Improvement to the efficiency of payment systems

• A CBDC could improve the efficiency and safety of both retail and large value payment solutions. These improvements span from retail providers using a point of sale, online, or peer-to-peer solutions to wholesale interbank payments with faster settlement options.

• Assists in the transition to a cash-less society

• Government and regulatory authorities have already begun to crack down on cryptocurrency payments or any other forms of money that may transform the current payment system. As an alternative, a CBDC may help boost the possibility of a cash-less society if a Central Bank adopts a digital form of monetary unit which could been seen as a credible alternative by a government or regulatory body.

• As previously mentioned, the current method for international payment options can be time-consuming and expensive. A digital alternative to help streamline this process has the potential to drastically change the global payment ecosystem.

READ ALSO; $51,000 WORTH OF BITCOIN TRADED AS EL-SALVADOR ADOPTS CRYPTO

Where Else are Central Bank Digital Currencies Being Used in the World?

Countries have begun exploring some test case scenarios of a CBDC with their national currency. In February 2020, six Central Banks joined together to create a working group and collaborate on use cases for a CBDC.

China has emerged as a frontrunner in creating their own CBDC with their proposed digital currency electronic payment (DCEP) system. China’s push towards an electronic payment society offers a digital yuan to increase transferability and settlement options. One of China’s goals behind their DCEP is to increase the utilization of the yuan internationally, especially among smaller countries, to help establish the yuan as a dominant global means to trade.

Additionally, the Bank of Japan announced in June 2020 that it will begin experimenting with a digital yen as they start to test the technological feasibility and demonstrate their proof of concept that they’ve been working on.

There are many other countries still working on possible CBDC options, including the United States. Central Banks are exploring possible ways to integrate this technology into their existing monetary system in order to stay current with the constantly evolving technology landscape. The means through which payments are made has drastically evolved over the last ten years and will continue to do so as new technology breakthroughs are made.