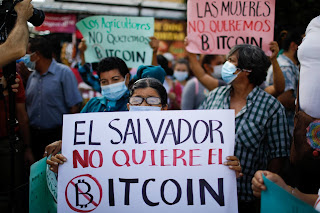 El Salvador’s historic adoption of bitcoin as legal tender on Tuesday was beset by teething problems, as an angry protest by mistrustful citizens, technological glitches and a dip in the cryptocurrency clouded the rollout. Bryan Wood reports.

More than a thousand people protested against bitcoin in El Salvador’s capital on Tuesday rallying against its adoption as currency there amid a bumpy digital rollout.

Protestors started at least one fire and set off fireworks in front of the Supreme Court.

The government deployed armed police in San Salvador to control the crowds.

Gloria Martinez was among those who say Bitcoin is too risky.

Polls show many Salvadorans agree that bitcoin is not stable enough.

READ ALSO; CRYPTO IS BRINGING HOPE TO EL-SALVADOR AS BITCOIN BECOMES OFFICIAL CURRENCY FOR THE COUNTRY

And it may not have helped proponents when, earlier on Tuesday, those interested in downloading the Bitcoin digital wallet, called “Chivo” found it was unavailable on popular app stores.

The country’s president, Nayib Bukele, tweeted out to companies like Apple to stock the app and Huawei later did.

The app proved unable to cope with user registrations, so it was unplugged in order to increase its capacity.

Eventually by late afternoon, Bukele was retweeting videos of people making bitcoin payments at retailers like Mcdonald’s and Starbucks. 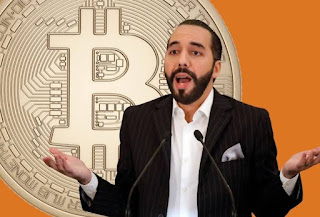 Ahead of its launch, El Salvador purchased some $20 million worth of Bitcoin, saying it’s a way for ordinary people to invest in financial markets.

Even still, the poorest may struggle to access the tech needed to make bitcoin work in a country where nearly half the population has no internet access, and many more with spotty connectivity.