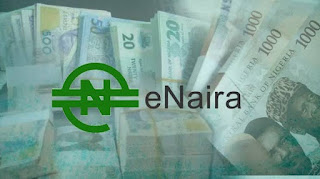 Emefiele said this while answering questions from members of the press after presenting the outcome of the two-day Monetary Policy Committee (MPC) meeting on Tuesday in Abuja.

The MPC, at the meeting, retained the country’s Monetary Policy Rate (MPR) at 11.5 per cent. and also unanimously agreed to retain all other monetary policy parameters.

The Cash Reserved Ratio (CRR) was, thus, retained at 27.5 per cent, Liquidity Ratio, 30 per cent and Assymetric Corridor, +100 and -700 Basis Points around the MPR.

Emefiele, answering questions after presenting the MPC meeting outcome, said that Person to Bank and Bank to Person transactions have accounted for 90 per cent of transactions done on the eNaira speed wallet.

“Since its launch about three months ago, Nigerians have continued to gradually adopt eNaira as a fast and reliable means of exchange.

“The Person to Bank and Bank to Person constitute 90 per cent of what we see in the market, and as you will observe, we spent the last three months observing and monitoring the system and addressing issues mostly around initial onboarding,’’ Emefiele said.

According to him, transactions on the system have been super-fast and remain free for now.

He said that stringent validation procedures were enforced to preserve the integrity and security of the system since it was account based, and required a digital identity.

“We feel that you must have a BVN and you must have an account to be able to access it; And we also find that this has created some kind of constraints on people about onboarding with BVN and the rest of them.

“But again, we believe that what we do by the use of the BVN is the best so as to avoid fraudsters from hacking into the system.

“Most of the complaints received were mainly around the inability of prospective users to onboard and activate the E wallet due to a mismatch of BVN enrollment records,’’ he said.

Emefiele said that the bank together with the Nigeria Interbank Settlement System and the Deposit Money Banks were working to simplify the process of updating such information.

He added that considerable progress had been made with the release of locked accounts for re-onboarding.

The CBN Governor also said that foreigners who had BVN could now onboard the system.

He added that with the recent assignment of the enaira USSD code by the Ministry of Communications and digital economy, Nigerians without a smartphone would soon be able to onboard and conduct transactions using enaira by dialling code 997.

Emefiele said that the apex bank was engaging the fintechs and other industry players to create a bouquet of products on enaira platform.

He said that while transactions on the system have so far mostly revolved around moving money to and from bank accounts, tests with licensed payment services providers were ongoing to enable payments using enaira on E commerce platforms.

The CBN Governor explained that this would enable Small and Medium Enterprises and other commercial service providers to offer their products and services and accept enaira as a means of payment and exchange.

He said that CBN was working on a framework that would leverage the existing and new infrastructure to soon extend the service of enaira to the unbanked, as part of its commitment towards meeting targets for Financial Inclusion.

Besides, he said that the bank together with its stakeholders planned to embark on a rigorous awareness campaign to create the necessary understanding of the operations of the enaira