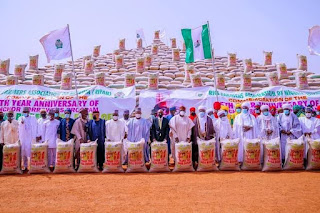 The Anchor Borrowers’ Programme (ABP) which was launched on November 17, 2015 was designed to provide farm inputs in cash and kind to Small Holder Farmers (SHFs).

The programme was intended to create a linkage between Anchor Companies involved in food processing and SHFs of the required key agricultural commodities through the commodity associations.

The ABP was designed to help the nation achieve self-sufficiency in food by, at least, “growing what we eat,’’ and then, put a stop to the reckless importation of food items. This was supposed to help save scarce foreign exchange which can then be used for other more pressing needs.

The ABP is funded and managed by the Central Bank of Nigeria (CBN), through its development finance initiative.

It commenced with a take-off grant of N220 billion Micro, Small and Medium Enterprises Development Fund (MSMEDF), through which farmers got loans at nine per cent interest. They are expected to repay based on the gestation period of their commodities.

The interest rate was later reviewed downwards to five per cent, to allow for more inclusive participation.

Recently, the apex bank revealed that it had disbursed about N791 billion to over three million farmers across the 36 states, under the programme.

Two initial beneficiaries of the agriculture revolution of the federal government, and the ABP were Kebbi and Lagos states. The two states went into a collaboration that birthed the LAKE Rice initiative. That initiative has now resulted to the construction of a multi-billion Naira 32 metric tons per hour capacity rice mill by the Lagos state government..

Recent occurrences across the country indicate that the ABP has started yielding the desired results, as the CBN unveiled rice and maize pyramids in some states. Kebbi appears to have positioned itself as a hub of rice production in the country, with the unveiling of its rice pyramids in March, which is also a pointer to the gains of the ABP.

The rice pyramids reflect the success of the programme and the attendant multiplier effects on the economy and the country’s food security.

The unveiling, which was part of the fifth anniversary of the scheme also served as an occasion to mark the National Rice Festival and the flag off of the 2020/2021 dry season input distribution under the aegis of the CBN-Rice Farmers Association of Nigeria (RIFAN) collaboration.

Kebbi state Governor, Atiku Bagudu, said investments in the ABP were already paying off, adding that the rice farmers displayed the successes and gains of the last five years by showcasing the massive array of rice pyramids.

“This is a great testament to the happy journey so far in spite of the devastating effects of the global COVID-19 pandemic on the economy, flood disasters and other issues.

“Nigerians have been resilient at work; hence, we are celebrating these achievements recorded in the last five years. The last five years have given us great hopes that agriculture will continue to produce the desired results,” he said.

Some rice farmers in Kebbi state also confirmed that the ABP had been of immense benefit to their farms.

According Ibrahim Amisu, a rice farmer, farmers are provided with six bags of fertiliser per hectare, water pumping machine, herbicide, and cash support.

“Almost everyone in Kebbi is now a farmer, even civil servants are now tapping into the opportunity provided by the programme. Everyone is now into rice cultivation and it has employed a lot of youths,’’ he said.

Emefiele, who commended President Muhammadu Buhari and the Kebbi State Governor for their support in the last five years of the “ABP experiment’’ said that unveiling the rice pyramids was a happy moment to celebrate the gains of the programme.

Shortly after the Kebbi showcase, the CBN also unveiled 13 Rice Pyramids consisting of 200,000, 50 kg bags each in Gombe State, an event the President described as marking the return of food sufficiency in the country.

READ ALSO; SPECIAL AGRO-INDUSTRIAL PROCESSING ZONES TO GET$520 FROM AFDB AND IT’S PARTNERS

According to Emefiele, though maize pyramids are rare, the apex bank was able to achieve the feat through synergy amongst stakeholders and the resilience of farmers.

He said that Maize was one of the priority crops under the ABP.

“This is due to the crucial role maize plays as a major staple food item, as well as its role as a significant feedstock for the poultry industry in Nigeria,” he said.

The CBN Governor assured that the apex bank would oppose all attempts to continue the importation of maize into the country.

He said that the step was geared towards encouraging local production as the CBN believed that maize farmers in Nigeria had the ability to close the maize demand gap of over 4.5 million metric tons in the country.

He explained that the maize unveiled at the ceremony would be sold to reputable feed processors adding that this would in turn impact positively on current poultry feed prices, as over 60 per cent of maize produced in the country were used for producing poultry feed.

However, there have been complaints in some quarters that some of CBN’s agriculture support initiatives were concentrated in a section of the country.

Emefiele debunked this by explaining that, out of N700 billion earmarked for the ABP, more than N300 billion had been disbursed in the southern part of the country for the expansion of food production.

Describing criticisms against CBN’s effort at boosting agriculture in Nigeria as unfair, he said huge funds had been disbursed to companies with farmers across Lagos, Edo, Ondo, Ogun, Osun, Ekiti, Bayelsa, Rivers, Cross River as major beneficiaries of the apex bank’s interventions.

In May, the CBN went ahead to unveil another set of rice pyramids in Ekiti state. This corroborated Emefiele’s defence, and indicated that over the years, the benefits of the ABP had been almost evenly distributed across the country.

At the event in Ekiti state, the CBN governor said that the ABP had expanded agriculture production for 21 crops across Nigeria.

He revealed that about 12,000 farmers were to benefit in the rice pyramid programme in the state, the first of such pyramids in the Southwest.

He also noted that the ease of production of rice, the most valued staple in Nigeria, has been successfully practiced and celebrated in some states like Kebbi, Jigawa, Sokoto, Niger, Kwara and Ebonyi.

“For some other states like Lagos, Edo, Rivers and more, there are CBN financed industries maximizing the farm produce to make products.’’ he said.

Gov. Kayode Fayemi of Ekiti State, said that Federal Government under Buhari had demonstrated the capacity to tackle poverty and reduce dependence on foreign food by many of his initiatives in the agriculture sector.

He noted that rice clearing, production of seedlings and farm implements at low interest would enhance rice value-chain from primary producers to processors.

He said: “Rice has become the most consumed staple in Nigeria. In the year 2018 alone, Nigeria imported 0.58 trillion worth of rice valued at 1.65 billion dollars. The present policy of support for local rice production has contributed immensely to food security in Nigeria.

“Considering the huge market and high population of Nigeria with the urgent need to eradicate poverty, it has successfully demonstrated the need to look inwards by taking advantage of the available fertile land, perennial river bodies and human resources for the production of rice.

Groundnut pyramids were common sight in Kano and other parts of Northern Nigeria in the past. These cities experienced a boom in groundnut production, which eventually became the country’s most valuable single exported crop.

The pyramids had, however, ceased in Nigeria from the 1980s, until the CBN initiated the ABP and renewed focus on agriculture, industries, small and medium scale enterprises and other areas of the real sector.

Apart from immense benefit to boosting the agriculture and food security initiatives of the Federal Government, these pyramids also have a multiplier, tourism potential, which, if sustained, can also boost the country’s economic diversification plan.