INSECURITY: I WILL NOT RESIGN OVER MY CALL FOR SELF DEFENCE; GOV. MASARI INSIST 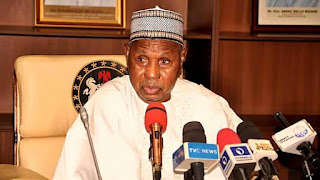 Gov. Aminu Masari of Katsina State has dismissed a call by the state’s chapter of the Coalition of Northern Groups (CNG) for his resignation over his stance on self defence against bandits.

Reacting to the call, Madari described it as quiet absurd for reasons not hard to fathom.

Alhaji Abdul Labaran, the governor’s Director General on Media, quoted Masari as saying this in a statement on Sunday in Katsina.

The News Agency of Nigeria (NAN) recalls that the governor had at a ceremony in Jibia Local Government Area of the state, advised residents to defend themselves against bandits and other criminals terrorising them.

Following the directive by the governor, the coalition called on him to resign his position as the governor and chief security officer of the state.

“Security is on the exclusive list of the Nigerian Constitution, which means it is exclusively a Federal Government affair.

“In matters of security, a governor is the Chief Security Officer of his state only in name, because the various security chiefs working in the state take orders not from him, but from their superiors in Abuja.

“The only things they take from governors are the financial and material assistance (both solicited and unsolicited), which they extend to the security institutions in the states.”

The statement declared that Masari was second to none when it comes to proactive engagement with security agencies in the state.

READ ALSO; INSECURITY: EL-RUFAI BAN TRANSPORTATION OF LIVESTOCK FROM OR TO KADUNA

He attributed the massive increase in the number of security formations in Katsina State and the North West in general to the dogged commitment and determination of Masari to see to the successful prosecution of the war against banditry.

According to the statement, it is this posture that persuaded his North West colleagues to make him the chairman of their security committee.

“As constitutionally elected office holders, governors do not succumb to the intimidation of some self-serving disgruntled elements, masquerading as human rights campaigners by resigning.

“If they are found wanting in the discharge of their responsibilities, the Nigerian Constitution has provided the protocols for easing them out of office, and no House of Assembly is in the dark about that.

“Masari is not the first Governor to make the suggestion. In states where the citizens do not politicise security issues, they rally round their leaders who had similarly admonished their people.

“Therefore, to suggest that governor Masari should resign for his patriotic candor and courage in admonition his people to wake up and resist the bandits by acquiring arms for self defence, betrays a sheer lack of the understanding of the letter and spirit as well as the workings of the Nigerian Constitution, or a motive which is anything but altruistic,” the statement read in part.