SURVIVAL FUND: FG warn beneficiaries over fraudulent messages being circulated over the purported payment of N80, 000 to beneficiaries 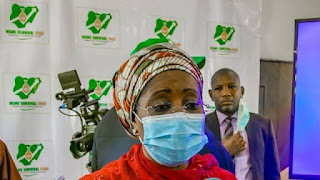 The Federal Government has raised an alarm over fraudulent messages being circulated over the purported payment of N80, 000 to beneficiaries of the Survival Fund Scheme.

In its warning to the general public, the government maintained that the amount given to beneficiaries remain N30,000 and N50,000 for Payroll Support; N30,000 for Artisans and Transport Grants; N50,000 for the General MSMEs Grant; and N100,000 per MSME for the guaranteed off-take stimulus scheme.

This disclosure is contained in a statement issued by the Project Delivery Office (PDO) of the scheme, on Saturday in Abuja, in which it said that the news of such payment was the handiwork of fraudsters seeking to scam unsuspecting members of the public.

What the PDO of the scheme is saying in the statement

According to NAN, the PDO in the statement emphasized that the Steering Committee of the MSMEs Survival Fund and the Guaranteed Off Take Stimulus Scheme headed by the Hon Minister of State, Industry, Trade and Investment, Amb. Maryam Katagum, was unaware of the fraudulent collation of account details.

The statement reads, “The attention of the Steering Committee of the MSMEs Survival Fund and the Guaranteed Off Take Stimulus Scheme has been drawn to an ongoing fraudulent social media campaign requesting individuals to drop their account details on a WhatsApp platform to access N80,000 as stipends under the Payroll Support scheme.

The notice requesting the public or individuals to disclose their account details on a WhatsApp platform is fraudulent and should be disregarded by all and sundry, as this message is not from the project delivery office of the scheme.

“The procedure for the implementation of all tracks of the survival fund and guaranteed off-take stimulus scheme does not require public display of account details to individuals or groups.

“It is also pertinent to note that under no track of the scheme are beneficiaries given the sum of N80,000 either in instalments or in whole.

“The steering committee wishes to state that the purported scheme is not known to government, hence the general public is enjoined to disregard any message(s) from any individual or group requesting them to submit account details.’’

The statement further pointed out that the steering committee had established lines of communication with the general public and beneficiaries, including prospective ones, and will deploy same in providing updates to all stakeholders.

The MSME Survival Fund, which is part of the N2.3tn stimulus package of the Nigeria Economic Sustainability Plan, was introduced by the Federal Government as part of efforts to help businesses overcome challenges posed by the Covid-19 pandemic.

The MSMEs Survival Fund scheme is a conditional grant to support vulnerable micro and small enterprises in meeting their payroll obligations and safeguard jobs in the MSMEs sector. The scheme is expected to save at least 1.3 million jobs across the country and specifically impact on over 35,000 individuals per state.

Recall that in March 2021, the Federal Government warned unsuspecting members of the public, who wish to apply for the MSME Survival Fund, to beware of fraudulent websites demanding account details, before giving applicants N50,000.