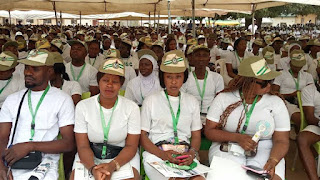 This it said was in consideration of the contribution of corps members to national development.

Chairman of the Committee, Sen. Obinna Ogba (PDP-Ebonyi) made the call in Abuja on Tuesday, while submitting the committee’s 2022 budget defence report of Ministry of Sports and Youth Development to Senate Committee on Appropriations.

Ogba, said it was worrisome  that corps members, who devoted their talents, skills in the service of the nation for one year,  were  paid  N600 as daily meal allowance as against the payment of N1,000 daily meal allowance to prisoners by the Nigerian Correctional Service.

Ogba, who also decried the decreasing yearly budgetary allocations to the ministry,  called for increased allocation of fund in its 2022 budget, given the importance of sports to youth development.

He said adequate fund was required to drive sports development , which ultimately would drive development of youths and the economy at large.

He said it was the responsibility of the government to provide enabling environment such as security, sports Infrastructure, like adequate stadiums,to attract investors and drive investments in the sports industry.

“Money is required for  development of sports in the country,” Ogba said.

He said that the five billion  naira,  budgeted in the ministries’ 2022 capital expenditure was grossly inadequate for sports development and mobilisation of  youths into sporting activities.

Collaborating ,Ogbas ‘position, a member of the committee,  Sen. Smart Adeyemi (APC-Kogi) said there was an urgent need to increase funding to the ministry, adding that the committee had  the ability to ensure improved allocation.

Adeyemi noted that investment in sports industry would  improve the economy, noting that sport was a big time business in other nations.

He advocated for  provision of a “Special Fund “from the appropriation committee, adding that sport would provide jobs for  unemployed youths and discourage social vices.

Chairman of the committee, Sen. Barau Jibril (APC-Kano) said there was need to have a “Master Plan” to drive sports development in the country.

He also said that private sector investment was the trend in sports development across the world.

Barau also said the Federal Government was investing much in youth development by earmarking funds in the budget for  development of youths via its various humanitarian programmes.

However, Sen. Stella Oduah (APC-Anambra) said the budget of the ministry did not appear to speak toward development of  youths.

Oduah said there was need to revert to the planning stages of sports development, noting that the basics of youth development via sports must be put in place.

Other committees, that  submitted their budget reports to the appropriation committee were committees on Air Force, Drugs and Narcotic, Trade and Investment, Ecology, among others.