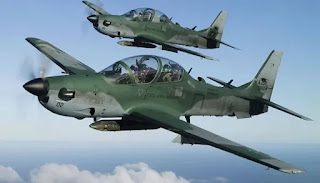 Following a ruling by the Federal Court of Justice in Abuja on Thursday declaring the bandits terrorists, the Nigerian Air Force is ready to use Super Tucano aircraft in the north-west and north-central regions of the country, particularly in the states of Niger, Sokoto, Kebbi and Zamfara.

The military, newsway learned on Saturday, was reluctant to use the aircraft outside of the Northeast because of conditions related to the human rights-based sale of the aircraft by the United States.

The coast had been cleared to use the Super Tucano aircraft against bandits in the northwest and north-central after the court declared them terrorists and the bandit groups Yan Ta’adda as acts of terrorism.

The DPPF informed the court that the ex parte application was filed on the instructions of the President, Maj. Gen. Muhammadu Buhari (in the retired affidavit filed in support of the ex parte application), alleging security reports confirmed that the bandits were behind them “incessant kidnapping for ransom, kidnapping for marriage, mass kidnapping of school children and other citizens, cattle theft, slavery, imprisonment, severe deprivation of physical freedom, torture, rape, sexual slavery, forced prostitution, forced sexual pregnancy, other forms Violence, attacks and killings in communities and commuters, and rampant destruction of life and property in Nigeria, particularly in the states of northwest and north-central Nigeria.

The affidavit added, “The activities of the Yan Bindiga and Yan Ta’adda groups and other similar groups constitute acts of terrorism that can lead to a breakdown in public order and security and a threat to national security and the very existence of businesses Representing Nigeria.

Judge Taiwo maintained the ex parte inquiry and declared the activities of the “Yan Bindiga group” and “Yan Ta’adda groups and other similar groups in every part of the country, particularly in the northwest and central north, as” acts of terrorism, Judges “also” issued an order prohibiting any person or group of people from engaging in any form of activity that involves or is related to the pursuit of the collective or other intentions of the Yan Bindiga Group and the Yan Ta’adda Group ” under a different name or platform, regardless of what it is called or described.

The court ordered the federal government to publish the prohibition order in the official gazette and in two national newspapers.

That newspaper reported that bandits killed more people than Boko Haram in 2021, which is believed to have influenced the National Assembly’s decision last month to ask the president to declare the bandits terrorists, a senior general told reporters on Friday .

However, at the request of Acting Director of Defense Media Operations Brigadier General Bernard Onyeuko, he said that the next step would be announced in due course.

On Saturday (today) newsway reported that the bandits’ activities had paralyzed activities in several states including Kaduna, Sokoto, Zamfara, Kebbi, Niger and Katsina, and most states were forced to shut down telecommunications.

Base stations that disrupted internet and telephone services while in some cases service stations were closed along with land borders to curb banditry.

In the state of Kaduna alone, the state government reported that no fewer than 888 people were on duty between January and September 2021, mutilation, kidnapping and homelessness of citizens, especially in the north of the country.

The Federal Government, on Friday, expressed its determination to crush bandits, who have for long held the country by the jugular, killing, maiming, kidnapping and rendering citizens homeless, particularly in the northern part of the country.

Malami said he would be “working assiduously” in collaboration with relevant government agencies, including security operatives “to do the needful to take full advantage of this declaration.”