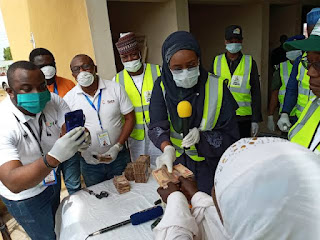 Nigeria’s federal government on Thursday began disbursement of $ 1.8 billion to 58,963 families in Benue State as part of its conditional cash transfer (CCT) program to lift vulnerable citizens out of poverty .

The program which is a national social investment by the federal government, the program has started paying off with residents of Daudu, ​​in the Guma local government area in Benue State and is expected to cover nine LGAs.

Mr. Dekaa Tarzaan, the payment clerk told the Reporters that the nine LGAs included: Vandeikya, Ushongo and Konshisha in Zone A, Gwer West, Guma and Buruku in Zone B and Ogbadibo, Ado and Oju in the Zone C.

Tarzaan said that at Guma LGA’s 4,686 families will receive the sum of 140.6 million naira, before moving to other senatorial areas for the next 10 days. According to him, three local government areas have been selected in each of the state’s three senatorial districts.

He said the total amount of disbursements to the state due to arrears was more than 1.8 billion.

“For each cycle we have six payments that cover a year, but there were some arrears that are included in that cycle. We usually pay every two months. six times to cover a year, but since that payment includes unpaid scholarships the number has increased,” Tarzaan said.

The Nigerian National Social Investment Program is a social welfare initiative launched in 2015 by the Nigerian federal government.

The program offers free loans to its beneficiaries and helps reduce business start-up costs in Nigeria.