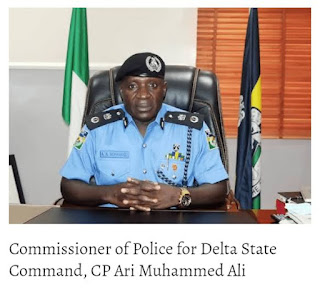 Newsway concluded that on that fateful day, Michael engaged the teacher in a fight that resulted in the teacher giving up the ghost during the fight.

The School teacher until his death, had allegedly beaten up Michael’s younger sister Promise Ogbeife, who was involved in an argument with her classmate.

It was concluded that Michael was angry about the teacher’s decision to spank his sister, and the angry SS3 student resorted to an argument with sources saying that Michael angrily left the school grounds after his sister was beaten up and then he returned and went straight to the staff room for a confrontation with the teacher.

Some of our sources claimed that Michael rushed home to get a spell before bringing the Master into battle.

It was learned that the Teacher collapsed after fighting the student, which caused the Teacher to have a nosebleed and blood oozed from his mouth as well, so the Teacher was taken to a private community hospital from where it was gathered he died .

In response to the bloody incident, the owner of the school, Mr. Erhimu, told reporters that he was waiting for full details of the matter as he was absent from the incident.

However, the visibly concerned owner ordered the school to close until Monday and noted that he had been at the police station about the matter.

To confirm the incident, Delta State Police Commission spokesman DSP Bright Edafe told reporters that “The suspect is nowhere to be found but his sister is in protective custody,” he said the alleged fled worsen .