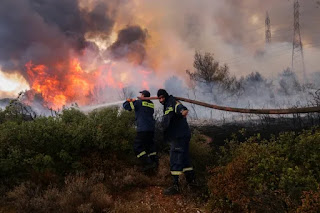 Hundreds of residents living near a forest area north of Athens fled their homes as a wildfire reached residential areas, fuelled by Greece’s worst heatwave in decades.

The blaze on Tuesday sent smoke over the capital and prompted multiple evacuations near Tatoi, 20km (12.5 miles) north of Athens. Many residents left their homes in cars and on motorcycles and headed towards the capital as smoke blanketed residential areas.

“It is a large fire and it will take a lot of work to get this under control,” greater Athens regional governor George Patoulis told state-run ERT television.

“People in the area should be on stand-by. We are asking members of the public in the fire-affected areas to keep the windows of their homes closed because the smoke is very dense.”

As the heatwave scorching the eastern Mediterranean intensified, temperatures reached 42 degrees Celsius (107.6 Fahrenheit) in parts of the Greek capital.

The extreme weather has fuelled deadly wildfires in Turkey, as well as blazes in Greece, Albania, Italy and across the region.