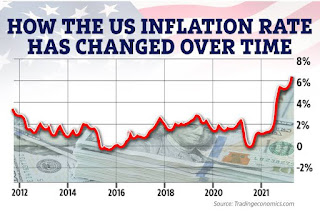 The U.S. Labor Department’s Consumer Price Index (CPI), closely tracked by bitcoin traders due to the cryptocurrency’s use by some investors as a hedge against inflation, has risen to its highest since the early 1980s.

The CPI for all items rose 6.8% in the 12 months through November, the highest since May 1982, when it was 6.9%. The cost-of-living increase was in line with the average forecast of economists in a Reuters survey, but it marked a sharp increase from October’s 6.2% print.

Stripping away the volatile food and energy component, the CPI core is at 4.9% – which is still significantly higher than Fed’s headline target of 2%.

Bitcoin, seen by a growing number of investors as a hedge against inflation, rose 2% in the minutes after the CPI data was released, trading around $50,000.

“I believe the rise in Bitcoin was more of a reflex reaction and probably won’t sustain,” said Lennard Neo, analyst at Stack Funds. “We are expecting more sideways trading as eyes shift towards central bank meeting next week.”

After the release of the October CPI data, bitcoin shot up by almost $3,000 to quickly hit a new all-time high of $68,950. But within a few hours, the move reversed completely, and prices fell as more traders shifted to focus on the logical consequence of faster inflation: monetary-policy tightening by the Federal Reserve that might crimp demand for riskier assets from stocks to cryptocurrencies.

The world’s largest cryptocurrency by market capitalization is currently trading at around $49,100, down 27% from the all-time high reached in early November when the last inflation report was released. Bitcoin is still up 69% on the year.

So far, it seems the market is welcoming the inflation numbers matching expectations.

“There was a potential risk of the Fed accelerating an interest rates rise if the numbers had surpassed expectations, but this has been severely diminished and investors seemed eager to buy to help sustain the thesis of bitcoin as an inflation hedge,” said Lucas Outumuro, head of research at IntoTheBlock.

“Today’s inflation figures were marginally less than many were fearing, but the reality is that if you’re being paid less than 7% more than you were this time last year, your purchasing power is diminishing,” said Jason Deane, crypto analyst at Quantum Economics.

He said that “The Fed has no real tools left to try and fight it and is effectively strapped into the ride with the rest of us.”

Looking ahead, Deane expects to see a rapid upward movement in gold, major indices and bitcoin.