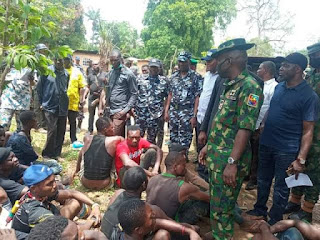 The Plateau State Government has imposed a curfew on Bassa, Jos North and Jos South local government areas, following Saturday’s attack on commuters in Jos North Local Government Area, where 23 persons were reportedly killed and 23 injured. At least 20 people suspected to have been involved in the attack have, so far, been arrested, an official said.

The federal government and the Kogi State Governor, Yahaya Bello, have also condemned the attack and called for the perpetrators to be punished.

NEWSWAY on Saturday reported the police confirming that 22 people were killed and 14 injured during the attack on travellers in Gada-biyu, in the northern part of Plateau State.

Governor Simon Lalong in a statement by his spokesperson, Makut Macham, on Sunday said the curfew started on Saturday from 6 p.m. to 6 a.m.

“The curfew shall remain in place, subject to further review by the State Security Council,” he said.

continue to monitor the situation and take further action if necessary, to ensure the safety of lives and property.

Mr Lalong also called for calm and appealed to residents to avoid any action or utterances that would further inflame the situation, saying security agencies are conducting investigations on the attack.

“So far, 20 suspects have been arrested and the security agencies are conducting investigations to get to the bottom of the matter,” he assured.

He sympathised with the families of those who lost their loved ones, and those injured as a result of the unfortunate incident .