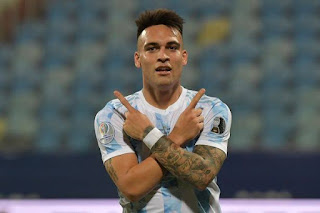 Tottenham are willing to pay around £60m for Lautaro Martinez and have held talks with Inter Milan over the signing of the Argentina striker.

Sources at both clubs insist no fee has been agreed as Inter officials are concerned about selling both Romelu Lukaku and Martinez.

READ ALSO; PSG IS POSSIBLY MESSI’s NEXT CLUB AS HE CONFIRMED BARCELONA LEAVE

However, buying clubs are aware of Inter’s need to cut costs this summer, a key reason for Antonio Conte’s departure in May.

Sky Sports News reported in May that Spurs were looking at other strikers in case Harry Kane departed.

In addition, Tottenham remain keen to overhaul their defence despite the signing of Cristian Romero from Atalanta.