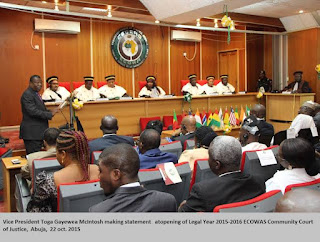 The Community Court of Justice, ECOWAS, will celebrate its 20 years of  existence with a review of the obligations of member states and respect for the judgments of the Court.

This is contained in the program of events made available to journalists by the Court. The conference which opens Sunday in Lomé, Republic of Togo, will see the participation of Togolese President  Faure Gnassingbé and ECOWAS President Jean Claude Brou.

The ECOWAS Parliamentary Rapporteur, the Honorable Sidie Mohamed Tunis, the eminent Nigerian legal personality Femi Falana and the judges of the Sub-Regional Court will also participate in the event organized by the President of the Court, Judge Edward Asante.

The conference which will examine the future prospects of the Court will also deliberate on the mandate of the Court, its strengths and weaknesses, as well as the human rights of the ECOWAS regime.

The role of the community jurisdiction in the integration process is also under discussion. According to the program, a central aspect of the deliberations will be “how to hold member states accountable for their treaty obligations and for non-compliance with some of their obligations to ECOWAS.”

The conference would also seek to clearly differentiate the roles of  Community jurisdiction and those of national jurisdictions in Member States in order to avoid conflicts.

“In the wake of this is the quest to address  challenges with  the community court enforcement mechanism, the monitoring of such executions as well as the role of national courts and the ECOWAS Commission.“

The week-long conference will also seek the best approach to settling cases of human rights violations in member states and ultimately reposition the court for better performance.