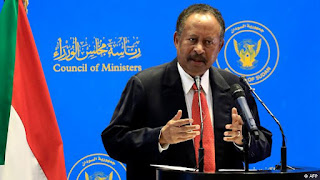 The Sudanese army reinstated Prime Minister Abdalla Hamdok on Sunday and vowed to release all political detainees after weeks of deadly unrest sparked by a coup, even as large crowds took to the streets to reject any deal involving the military.

Under an agreement signed with military leader General Abdel Fattah alBurhan, Hamdok, first appointed after the overthrow of autocrat Omar alBashir in a 2019 uprising, will lead a civilian government of technocrats for a period of transition.

This was stirred at the deaths of dozens of protesters following the October 25 coup. A hero of the protest movement, Hamdok quickly became the villain for some.

“Hamdok sold the revolution,” sang the protesters  after the deal was announced.

The Sudanese Professionals Association (SPA), a large protest group, called him a “traitor”. Tens of thousands of people attended the planned protests in the capital, Khartoum, and its sister cities of Omdurman and Bahri.

Security forces fired bullets and tear gas to disperse them, witnesses said. A 16-year-old protester in Omdurman died of a gunshot wound, the Sudanese Central Committee of Physicians said.

“Hamdok has let us down. Our only option is the road,” said Omar Ibrahim, a 26-year-old protester in Khartoum.

The United States, Britain, Norway, the European Union, Canada and Switzerland hailed Hamdok’s recovery and called for the release of more political detainees in a joint statement.

READ ALSO; COVID-19: Austria’ fourth public life closure is such a drastic measure by the government

The United Nations also hailed Sunday’s deal that Western powers condemned the government takeover last month and suspended economic aid to Sudan, which is trying to recover from a deep economic crisis.

The coup sparked mass protests against the military and medics in line with the protest movement, claiming security forces killed 41 civilians in an increasingly violent crackdowns.

Hamdok said he accepted the deal to avoid further casualties. “Sudanese blood is precious. Let’s stop the bloodshed and direct the energy of young people to construction and development,” he said at a signing ceremony broadcast on state television.

Burhan said the deal will be inclusive.“We don’t want to exclude anyone except, as we have agreed, the National Congress Party,” he said, referring to Bashir’s former ruling party. But the agreement makes no mention of the Forces for Freedom and Change (FFC), the civilian coalition that shared power with the military before the coup. A number of people present at the signing ceremony had political ties to Bashir.

The FFC said it did not recognize any agreement with the military. The Sudanese Congress Party, a prominent member of the FFC, many of whose leaders are detained, described Hamdok’s adherence to the agreement as “illegitimate and unconstitutional” and providing political cover for the coup. Resistance committees that staged protests also issued statements rejecting any deal with the military.

Hamdok was placed under house arrest when the military took power, derailing the transition to the 2023 elections. The military dissolved the Hamdok cabinet and arrested a number of civilians who held senior positions in the military.

Only Arman is among the former serving officials, many of whom  engaged in a war of words with military leaders before the coup. Under Sunday’s deal, a constitutional declaration of military-civilian clash in 2019 will remain the basis for continuing talks.

“The next government will focus on limited issues, mainly democratic transition,”  Hamdok said in an interview with Al Jazeera, said the elections would take place before July 2023, the channel added.