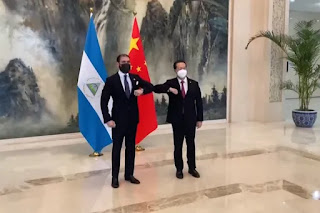 Nicaragua has broken off diplomatic relations with Taiwan, leaving the self-ruled democratic island with just 14 formal diplomatic allies amid continuing pressure from China, which claims the island as its own.

The Central American country made the announcement in a brief statement on Thursday from its foreign ministry, and cited Beijing’s “One China” policy.

“The Government of the Republic of Nicaragua declares that it recognises that in the world there is only one single China,” the statement read. “The People’s Republic of China is the only legitimate government that represents all of China and Taiwan is an inalienable part of the Chinese territory. The Government of the Republic of Nicaragua today breaks diplomatic relations with Taiwan and ceases to have any contact or official relationship.”

Formally known as the Republic of China, Taiwan’s government fled to the island at the end of the Chinese Civil War. It represented China at the UN from the end of World War II until the early 1970s.

Since the 2000s, China has steadily chipped away at Taiwan’s remaining allies who are mostly small countries in the Caribbean, South America and the Pacific Islands as well as the Holy See.

Beijing has become increasingly assertive since President Tsai Ing-wen was first elected president in 2016, with Kiribati and the Solomon Islands both breaking with Taiwan in 2019. The Solomon Islands decision remains controversial, however, and contributed to last month’s unrest in the capital, Honiara, which left at least three people dead.

During the Cold War, Taiwan and Nicaragua were both united by the anti-Communist beliefs of their one-party authoritarian states, headed respectively by Chiang Kai-shek and the Somoza family.

Both later transitioned to democracy although Nicaragua followed a more unstable path.

President Daniel Ortega has held power for 14 years and ahead of last month’s election, criticised by the United States, United Kingdom and European Union, imprisoned more than a dozen opposition leaders ahead of the vote for violating national security laws.

The US said the decision to switch ties did not reflect the will of the Nicaraguan people because of the “sham” election that took place on November 7.

“Without the mandate that comes with a free and fair election, Ortega’s actions cannot reflect the will of the Nicaraguan people, who continue to struggle for democracy and the ability to exercise their human rights and fundamental freedoms,” State Department spokesman Ned Price said. “We do know, however, that this deprives Nicaragua’s people of a steadfast partner in its democratic and economic growth.”

The US imposed sanctions on Ortega and his family during unrest that began in 2018 and led to the deaths of at least 325 people, according to the Inter-American Commission on Human Rights.

Ortega’s government had relied on financial support from Taiwan including a $3m donation to police in 2018, and a $100m loan in 2019.

Other foreign aid from Taiwan, however, has taken the form of more benign school lunch projects, health care and agricultural development projects, according to Taiwan’s Ministry of Foreign Affairs.

Nicaragua was probably prompted to make the switch because “they had an offer they couldn’t refuse” from China, said Lev Nachman, a postdoctoral fellow at the Harvard Fairbank Center. It was likely such incentives took the form of foreign aid, trade deals or other investment projects, he added.

Nicaragua is among three countries in its region to have signed onto China’s ambitious Belt and Road Initiative (BRI), a massive global infrastructure project worth more than $3 trillion by some estimates.