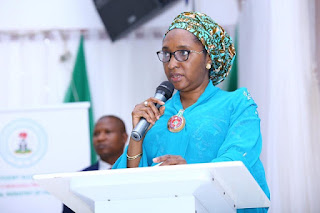 As the National Bureau of Statistics (NBS) sets to conduct the National Agricultural Sample Census (NASC) after 28 years, Mrs Zainab Ahmed, Minister of Finance, Budget and National Planning, says it is long overdue.

She spoke on Thursday in Abuja while declaring open a stakeholders’ sensitisation workshop on the importance of the census.

Ahmed said that the agricultural sector was one of the most important in Nigeria as it represents approximately 24 per cent of the economy and engages well over 50 per cent of the workforce, both directly and indirectly.

According to her, the sector is not only vital for economic output and employment purposes, but more importantly, is an essential part of the societal culture.

“The importance of this sector, more than ever before, has been demonstrated by the administration of President Muhammadu Buhari, through the heavy investments channeled into it since 2015.

“The aim of these investments is to increase output in the entire value chain to meet the nation’s demand for food, employment and export earnings.

“It is as a result of government’s heavy investment and attention to this sector that during the recession brought in by the Covid-19 pandemic and the security challenges being encountered in some parts of the country, the sector consistently recorded positive Gross Domestic Product (GDP) numbers.”

Ahmed, however, said that in spite of the positive results achieved in the sector, a lot more remains to be done as Nigeria’s population continues to increase exponentially, adding that food supply must meet the demand of the growing population.

She also said that the aspirations for a self-sufficient agricultural sector could not be achieved without the use of adequate and reliable statistics.

This, she said, was because the success of policies, plans and programmes could only be achieved with the right data underpinning them, hence the high premium the Federal Government places on quality data.

Mr Simon Harry, the Statistician-General of the Federation, said that agriculture was an essential activity with significant economic and social benefits to the nation.

“It is therefore pertinent that adequate, timely and reliable statistics on the sector are readily available for policy formulation, planning, monitoring and evaluation of progress of programmes and projects.

“Thus, the NASC is designed to produce vital primary data on the structural composition and operations of the sector.

“On completion of the census, the result will also form a statistical framework for the conduct of subsequent agriculture surveys in Nigeria.”

Mr Godwin Emefiele, Governor of the Central Bank of Nigeria (CBN), said that the census was appropriately timed.

He said that data on various commodities would assist the bank in its policy formulation processes and assessment of impact of its interventions in the sector, financed households and firms.

Represented by Mr Olabintan Adebowale, Emefiele said that the bank had introduced various programmes and schemes to create an ecosystem that ensures the supply of affordable and sustainable finance to various nodes of the sector’s value chain.

According to him, the programmes, which have recorded huge successes, have also helped reduce the nation’s food import bill from 3.40 billion dollars as at 2014 to about 0.59 billion dollars, representing a decline of over 80 per cent.

He said that this was especially in a country like Nigeria that was dependent on agriculture and with so much of the labour force involved in agriculture.

Mantovani said that such exercise was the foundation for fully understanding the state of the agricultural sector to identify better policies to improve productivity and to improve the well-being of the many people whose livelihood depends on agriculture.

“As we know, sadly, Nigeria has been deprived of an agricultural census for almost 30 years and so has lacked or has suffered from a gap of precious information and knowledge to understand this critical sector to drive, to incentivise, to encourage and to development it.

“So, today, the World Bank is proud to support the NBS and the government in finally ending this extended drought of key information through the implementation of the NASC.”

Mr Clem Agba, the Minister of State, Budget and National Planning, said that the census would be a complete integration of all agricultural activities within the country.

He also said that the NBS was working in collaboration with the World Bank and the Food and Agriculture Organisation (FAO) to come up with a comprehensive design and strategy for the conduct of the exercise.

“To this end, a clearly defined timeline has been developed, covering all aspects and distances from the planning stage and the dissemination of results. In addition, a comprehensive communication strategy has been developed.

“The scope of information to be collected in this phase include demographic details of the holders, type of agricultural activity, crop production, fishery, poultry, livestock, type of produce and product.”

He added that all the information received would then be processed to form the final output of the census, and be presented in the latter part of 2022.

The News Agency of Nigeria (NAN) reports that the last successful NASC was conducted in 1993 while the one conducted in 2014 was declared inconclusive.

However, the FAO recommends that each round of agricultural census should cover a 10-year period.