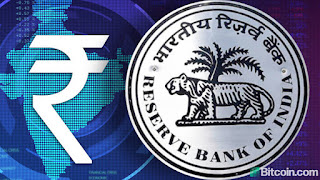 Central banks including those in China, Europe and the U.K. are exploring digital currencies that would be issued by them, either to commercial lenders or to the public directly.

They are called central bank digital currencies, or CBDC — legal tender in digital form, and are essentially the online version of their respective fiat currencies. In India’s case, that would be the digital rupee.

“We are being extremely careful about it because it’s completely a new product, not just for RBI, but globally,”

The RBI is studying various aspects of a digital currency including its security, impact on India’s financial sector as well as how it would affect monetary policy and currency in circulation, according to the governor.

Das added that the central bank is also exploring the choice between having a centralized ledger for the digital currency or the so-called distributed ledger technology (DLT).

DLT refers to a digital database that allows multiple participants to access, share and record transactions simultaneously. A centralized ledger means the database is owned and operated by a single entity — in this case, the central bank.

“I think by the end of the year, we should be able to — we would be in a position, perhaps — to start our first trials,” Das told CNBC.

His deputy, T Rabi Shankar, last month said the central bank was working toward a “phased implemental strategy” for a digital currency.

Central banks stepped up their efforts looking into digital currencies over the past year following a decline in cash usage and growing interest in cryptocurrencies like bitcoin.

The People’s Bank of China is leading the way, with real-world trials already in place across several cities. The European Central Bank and the Bank of England are also looking into a digital euro and a U.K. CBDC, respectively.

CBDCs differ from cryptocurrencies in several important ways — first, they would be fully regulated and under a central authority, typically the central banks.

Second, instead of being a tradeable asset with wildly fluctuating prices, central bank digital currencies would function more like their fiat counterparts, and would have widespread acceptance.