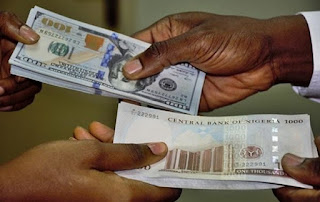 Wednesday, 8th December 2021: The exchange rate between the naira and the US dollar closed at N415.07/$1 at the official Investors and Exporters (I&E) window.

Naira remained stable against the US dollar on Wednesday to close at N415.07/$1. This was the same rate that was recorded in the previous trading sessions as a drop in the country’s external reserves continues with a decline of $22 million.

However, the naira appreciated against the US dollar on Wednesday as it closed at N568/$1. This represents a N2 gain when compared to the N570/$1 that was recorded in the previous trading session. This is according to information obtained from BDC operators interviewed by Newsway.

The local currency remained flat at the official market as the CBN intensifies its intervention in the foreign exchange market.

The exchange rate at the Investors and Exporters window remained stable to close at N415.07/$1 on Wednesday, the same rate that was recorded at the last trading session.

The opening indicative rate closed at N413.71/$1 on Tuesday, which represents an 8 kobo drop compared to N413.63/$1 recorded in the previous trading session.

Forex turnover at the official window remained marginally flat to trade at $225.99 million on Wednesday.

According to data tracked by Nairametrics from FMDQ, forex turnover at the I&E window stood at $225.99 million recorded on Tuesday 7th December 2021, marginally the same volume of $225.94 million on Wednesday 8th December 2021.