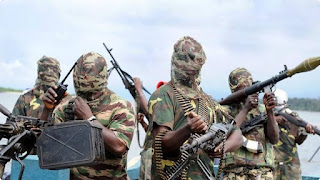 The National Security Adviser (NSA), Maj..-Gen. Babagana Monguno (retired), says the wave of mass surrender of Boko Haram terrorists in the North East has prompted large scale humanitarian activities to rehabilitate and reintegrate the returnees back into the society.

Monguno made the disclosure while speaking on “Combating Persistent and Emerging Threats to Regional Peace and Security in Africa: Pivotal Role of Nigeria” at the Nigeria international Partnership Forum in Paris.

Monguno’s speech was made available to newsmen by the Head, Strategic Communications, Office of the National Security Adviser (ONSA), Mr Zakari Usman, on Friday in Abuja.

The NSA said that over 15,000 insurgents had so far surrendered to the Nigerian troops in different locations in the North East.

According to him, the comprehensive approach employed under the direct supervision of President Muhammadu Buhari in Nigeria’s counter terrorism operations since 2015, has continued to significantly degrade this threat.

“In recent months, there has been an endless mass surrender of terrorists and their sympathisers in the North Eastern part of Nigeria.

“Currently, over 15,000 people have been received. It is important to note that the combination of kinetic and non-kinetic measures, largely contributed to this wave of surrender.

“This situation has prompted large scale humanitarian activities to rehabilitate the returnees by expanding the already existing Operation Safe Corridor for de-radicalisation and subsequent re-integration into society.

“In addition, I must mention the support of our neighbours Niger, Chad and Cameroon in our regional Counter terrorism efforts under the framework of the Multinational Joint Task Force (MNJTF) in the Lake Chad Basin.

“Their determination and commitment have been quite reassuring,” he said.

Monguno said the threats of terrorism and violent extremism had continued to place a significant security burden on the African continent, particularly in the Sahel.

He said that apart from Somalia in the Horn of Africa, the most prominent acts of terrorism were perpetrated in the West African environs, particularly Mali and Nigeria.

According to him, it is necessary to state that the splintering of the Boko Haram Terrorist (BHT) group into the Islamic State West Africa Province (ISWAP) created an additional stress for Nigeria and the Lake Chad Basin Countries (LCBC).

The NSA further stated that transnational organised crimes such as illicit financial flows, money laundering and proliferation of Small Arms and Light Weapons (SALW) amongst others, had continued to create security challenges in the region.

He said that while illicit financial flow was a serious concern due to the linkage to terrorism and other transnational crimes; the proliferation of SALW had been a major challenge facilitated by porosity of borders.

According to him, as part of efforts to address proliferation of SALW , Nigeria recently established a National Centre for the Control of Small Arms and Light Weapons (NCCSALW) domiciled in the Office of the National Security Adviser to serve as the institutional framework as well as compliment other efforts.