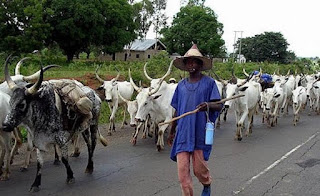 The African Development Bank (AfDB)is to train herdsmen and other Nigerians on livestock farming and ranching in the first phase of the initiative to create Special Agro-industrial Processing Zones (SAPZs).

The News Agency of Nigeria (NAN) the initiative is a public-private partnerships aimed at developing priority value chains through developing infrastructure in rural areas and finishing and transforming raw materials and commodities.

AfDB said the bank and partner institutions plan to raise $520 million for the implementation of Phase 1 of the project.

Prof. Banji Oyelaran-Oyeyinka, Special Adviser on Industrialisation to the President of the AfDB told NAN in an Interview on Thursday that livestock farming was one of the areas selected by the states.

The AfDB representative added that the livestock farming and ranching will require training for beneficiaries,

He said that the eight benefiting states were given option to identify their top three crops, saying that apart from livestock, some identified cassava, rice, cocoa among others.

He said that with the processing zones, it is hope that the era of people carrying cattle about would soon be over.

“So we are hoping that the processing zone will also create the special livestock zone, including ranching and whenever you see livestock at the heart of it, then you see people making feed stock, veterinary services.

“So each of them will create a significant value chains, solve this problem of insecurity, solve the problem of headers farmers clash, bring harmony to rural communities, raise income and then ensure security,

“So I think its a good thing that those particular states have identified livestock.

“In some places like Imo for example, they want to also do a lot of poultry, so its across as I said all the four aspect of agric business, crop, forestry, livestock, fishery.

“So, we are open to support on all forms, as you know Nigeria is a huge country, and there is no area of Nigeria where you don’t find this kind of resources that we are able to add value to,” he said.

He stressed that the target of the initiative are the poor and the small holder farmers, adding that there will be a great deal of advocacy to explain to people the rationale.

“Like I said it is not an optimum solution that people are running around, fighting and killing, so we hope our contribution will also help to solve this problem, so yes, so there will be training,” he said.

He added that the International Fund for Agriculture Development (IFAD) which is also a co-sponsor of the initiative, will also contribute to training based on their successes with small holder farmers.

He said that the AfDB will also be partnering other Agric-based institutions that have milestones in the requisite fields to contribute to making the project a huge success.

“So you will be seeing a lot of things simultaneously going on, capacity development, engaging with all kind of partners, small medium large, those things will be going on in the next couple of months,” he said.