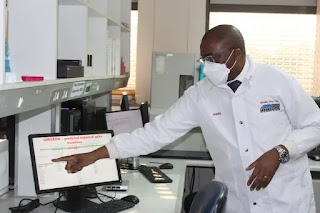 The day Dr. Sikhulile Moyo regrettably calls Omicron Day, started like any normal day, or as normal as it can be for a medical virologist in the midst of a global coronavirus pandemic.

On this Friday morning, November 19, the 48-year-old Zimbabwean prayed with his wife and children as usual, devoured cereal, and then ran to avoid the traffic in Botswana’s capital, Gaborone.

On the way to work, the gregarious laboratory director sometimes played his own gospel recordings, but that morning, he listened to a Ghanaian pastor and motivational speaker.

Once at the Botswana Harvard HIV Reference Laboratory (BHHRL), Dr Moyo and his team checked on the PCR tests that lab coordinator Dr Dorcas Maruapula had left running overnight, all taken from Covid-positive samples.

As per their weekly routine, the researchers then processed the nucleic acid – the molecules that make up the virus’s genetic material – extracted from the samples using a palm-sized MinION sequencer.

The device produces full sequences of genetic data in real-time that allow the team to look for any evolutionary changes in the virus as it is transmitted.

Wonderful Choga, 31, a bioinformatician from Zimbabwe, kept an eye on the computer as the USB-connected MinION outputted genome sequences, his usual cup of coffee at the ready.

But later that day, as the team were getting ready to go home, something odd happened.

“There were four sequences showing very strange patterns that we had never seen before. I felt a lot of emotions in my heart,” says Dr Moyo, recalling rising feelings of concern. 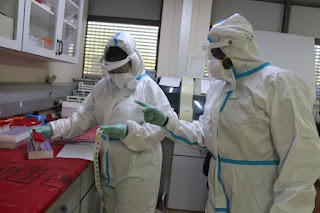 On the computer, mismatches in the samples’ genetic code against the original SARS-CoV-2 virus had been flagged across rows of multicoloured letters.

The discrepancies were so great that Dr Moyo worried there was some kind of mistake. But after the team ran thorough quality checks, they still came up with the same results.

“It was quite alarming to us simply because we’d never seen such a lineage in Botswana,” adds Choga. “It was heavily mutated.”

At least 30 mutations on the virus’s spike protein, which binds to receptors on human host cells, and more than 50 in total – far more than in other variants to date – signalled a worrying finding.

Dr Moyo consulted with his longstanding collaborator Dr Simani Gaseitsiwe, the lab’s other senior scientist, and after “working all weekend” to cross-reference their results against other known variants, he decided on Monday morning to report the unusual sequence to Botswana’s Ministry of Health and Wellness.

They confirmed that the samples had come from four foreign nationals, visiting diplomats who tested positive for COVID-19 on November 11. Officials haven’t confirmed where the diplomats travelled from, saying they want to avoid stigmatising other nations, but Botswana’s president stated in an interview with CNN that at least some had “been to Europe”.

Shortly after, Dr Moyo uploaded the new genetic data to GISAID, a popular open-access database that labs around the world use to rapidly share genome sequences.

Meanwhile, scientists working in parallel in South Africa and Hong Kong were also sequencing the new variant, subsequently designated B.1.1.529, and then named “Omicron”.

Their discoveries – to which South Africa alerted the world on November 25 – set in motion a chain of events that moved stock markets and saw some governments impose sweeping travel restrictions on Southern Africa. 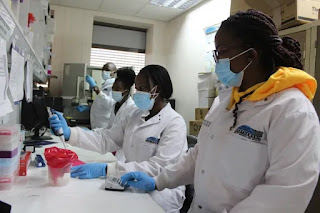 The travel restrictions – condemned by the UN secretary-general and the World Health Organization (WHO) among others – directly affected Botswana’s economy and those of its Southern African neighbours, most of which were expecting many visitors over the holidays. They have baffled and distressed Dr Moyo and his team.

“We don’t think that the countries – ourselves, South Africa and others – should be punished for sharing our data transparently with the world,” says Dr Moyo.

“The response has not really been proportionate,” he says.

“It’s like taking an AK-47 to kill an ant before you understand it. I’m saddened by the response – you do great science and now, when I see the news, I almost feel like switching off my TV.”

The restrictions could even make the surveillance of new variants more difficult.

“We are going to be impacted even in terms of reagents (compounds used to facilitate chemical reactions, including to prepare samples for genome sequencing) that we so desperately need, as most are not transported by cargo flights but via normal airlines,” says Dr Gaseitsiwe, a molecular virologist and a principal investigator at the lab.

Throughout the pandemic, Dr Moyo and his team have been working around the clock to perform a significant chunk of Botswana’s diagnostic PCR testing.

And since early 2021, they have genome-sequenced some 2,300 positive SARS-CoV-2 virus samples.

Observers also viewed the region, which is already struggling with vaccine access, as being punished for sounding the alarm.

“You can ask my family. They are understanding, but sometimes, it’s a lot of hours,” he says.

Dr Moyo says that the team’s consistent, week-in, week-out genomic surveillance and systematic sequencing of positive samples meant that even though they don’t have the resources of leading international sequencing centres, they were able to quickly detect the mutations.

According to Dr Gaseitsiwe, Botswana’s genome sequence submissions to GISAID are among the highest in the African region on a per capita basis, on a par with its well-resourced neighbour South Africa.

Designated a variant of concern by WHO on November 26, some of Omicron’s mutations are “lineage-defining”, says Dr Moyo, meaning that they can be used to detect the variant anywhere. 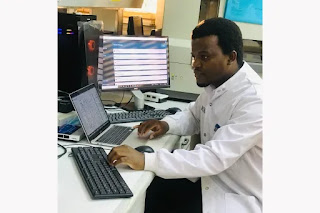 He adds that it is not yet clear when and how it originated, although it appears descended from an early coronavirus variant and not a more recent one. Scientists across the world have been racing to assess how transmissible Omicron is and the severity of the disease it causes, as well as how effective available vaccines are against it.

“Sometimes when a virus changes like this, it might make it more wimpy, meaning it might actually die away. Or it might give it a fitness advantage. Preliminary evidence does suggest it may be highly transmissible,” Dr Moyo explains. As of December 10, Omicron had been detected in 63 countries, in all regions of the world.

Dr Moyo and his team’s ability to perform real-time genome sequencing was grounded in another major disease outbreak.

“I can’t imagine us having been able to do this without the previous work that we have been doing on HIV,” says Dr Gaseitsiwe, who, like Dr Moyo, was in the early stages of his career in the late 1990s when the global HIV epidemic was at its peak in Southern Africa.

He says about 80 percent of the researchers at the BHHRL who have become SARS-CoV-2 specialists were previously working on HIV, the human immunodeficiency virus.

Many of the team’s passionate researchers were motivated to work on HIV having witnessed both the cutting-edge science emerging around the disease and the devastation.

“Saturday was reserved for funerals,” recalls Dr Moyo, whose own relatives were affected by HIV. “To see that the tiniest of organisms could cause so much havoc – I wanted to be part of the response.”

Dr Moyo joined the Botswana Harvard AIDS Institute Partnership (BHP) in 2003, two years after the umbrella organisation opened the BHHRL, its purpose-built HIV research lab and one of the first on the continent.

It was also a year after Botswana became one of the first nations in Africa to roll out free antiretroviral treatment as part of its widely celebrated efforts to combat the terrifying impacts of the HIV epidemic on its population.

While the country remains seriously affected – HIV prevalence stands at 19.9 percent among adults, down from rates as high as 35.8 percent in 2000 – AIDS-related deaths have decreased significantly. More recently, the country has achieved a major milestone by bringing mother-to-child transmission of HIV to under 5 percent, the first high-burden country to do so.

“The team really has done ground-breaking research, including research that has changed WHO guidelines, particularly in preventing mother-to-child transmission,” said Dr Shahin Lockman, an infectious diseases physician and clinical researcher at Harvard University in the United States.

The lab started using the MiniION platform through a 2019 grant to work on HIV, but had already built capacity to look at how viruses change their genomes. Dr Moyo himself has developed methods of analysis of HIV sequences to better understand the timing of infection.

Their genome sequencing of HIV and other pathogens gave them a “stepping stone” to switch to sequencing the SARS-CoV-2 virus. “We failed a little bit in the beginning, some samples did not work.

And finally, boom!” he says, snapping his fingers sharply. “Now, we are really trying to help other labs in the region.”