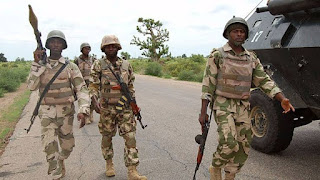 FOLLOWING the ongoing military operations against bandits, four notorious bandits have been killed in a valley popularly known as ‘Maikwandaraso’ in the Igabi Local Government Area of Kaduna State.

The state Commissioner for Internal Security and Home Affairs, Samuel Aruwan, who confirmed this on Sunday, gave the names of neutralised bandits as Alili Bandiro, Dayyabu Bala, Bala Nagwarjo and Sulele Bala.

According to him, several other bandits were eliminated in the same cycle of air and ground offensives.

Maikwandaraso is close to Karshi village and shares boundaries with the infamous Kawara and Malul forests in the same Igabi LGA which had been identified as the hub of several bandit camps and hideouts.

The Commissioner said the State Governor, Malam Nasir El-Rufai, was excited when he received the report of the military gallantry over the bandits.