What I unveiled to the public was just the truth and nothing more to it.

Poverty has dealt with Africa so much that even educated Africans can’t read between the lines. This is just the simple fact.

Before furthering more on this, for those reading me from Nigeria lets try to examine our newly launched digital currency (the eNaira).

The first question to ask about the eNaira is, in your neighborhood or among your friends or peers, who among them has successfully completed a transaction on the eNaira platform? Will you then call the “project giant” a scam? or a failed innovation?

Secondly, my definition of the word SCAM is this;

“A scam is an intended way of enticing a person, organization or even a government with something of value in order to collect or take from them what is of greater value”.

Sequel to the definition above, I am confused by the context in which the word “Scam” is used or applied grammatically mostly in Nigeria today.

Is Lumi currency a failed innovation?

The Lumi currency is not and can never be a failed innovation in any way.

Why is the Lumi currency not withdrawable?

The answer to this question is very simple. Lumi currency is still in its promotional stage and African governments and individuals must be sensitized to accept the Lumi currency as a legal tender. This is what the eNaira is also undergoing through right now. So both the Lumi currency and eNaira are not and will never be failed innovations.

Eco-6 authority or the Diaspora Central Bank placed no fee or any hiding charges for the stimulus, it’s free. Africans are therefore urged by this article to allow the Authorities to engage these governments.

In the last FAQ question on the Lumi currency portal which you can read HERE states clearly where and when the currency can be used. 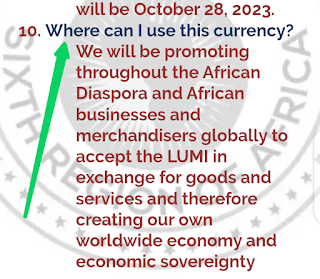 Lumi currency is of more value than even the Euro because it is pegged against 4 grains of gold and underwritten by 100kwh of solar energy. If Africans understand these “terms” which I will be explaining in my next post I’m quite sure they will never have double minds.

BE PATIENT, DON’T BE TOSSED BY ANY WIND OF DOUBT.