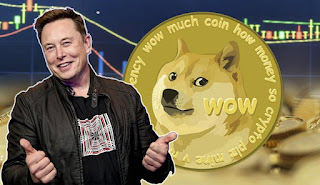 In the latest in a series of tweets praising Dogecoin, Elon Musk stated Tesla Inc. will accept payment in Dogecoin for some products, causing the meme coin to increase by  20%.

The tech mogul has long been a supporter of the meme-based cryptocurrency and has even invested in it. In May, he asked his Twitter followers if they thought Tesla should accept Dogecoin payments, and more than three-quarter said yes.

The next major feedback on the issue came today as he tweeted, “Tesla will make some merch buyable with Doge & see how it goes.”

As a result, Tesla takes the uncommon step of accepting just Dogecoin as a cryptocurrency. Musk runs the danger of enraging Bitcoin supporters, as he previously authorized and then banned Bitcoin purchases for Tesla automobiles due to an apparent environmental issue.

Musk also  declared that Dogecoin is “better suited for transactions” than Bitcoin, after being named TIME Magazine’s “Person of the Year” this week,

“The total transaction flow that you do with Dogecoin, like transactions per day, is much higher potential than Bitcoin,” he said, adding to a longstanding record of public praise of DOGE.