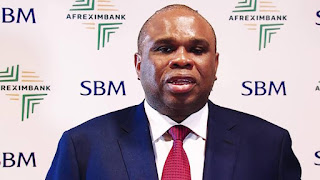 The president of the African Import Export Bank (Afreximbank), prof. Benedict Oramah, argues that the African creative industry is a powerful tool that could increase the gross domestic product (GDP) of African countries and lift young people out of poverty.

He said  the creative industry has the power “to catalyze intra-African trade, create millions of jobs for the continent’s young population and promote the emergence of national and regional value chains.”

“Africa’s creative and cultural industries was instituted by Afreximbank in a way that would revolutionize the continent’s untapped talent. The creative industry is a bankable market,” he said.

He assured that Afreximbank will continue to support the creative economy. In his speech, South African Minister of Arts and Culture Kosinathi Mthethwa, who made the official launch, said the CANEX program represents an opportunity to unlock the best of Africa.

He went on to say what may be Africa’s next gold maybe  could be positively influenced by the rich tapestry of arts and culture.

“At the heart of cultural diplomacy is the notion of interpersonal relationships and Africa can use ‘soft diplomacy’ by harnessing the arts to create these human connections.

CANEX activities included a panel discussion on the use of AfCFTA to promote African cultural and creative industries and a conversation with Afreximbank President Prof. Benedict Oramah.

Other activities that took place at CANEX included another conversation with Nigerian American actress Folake Olowofoyeku;

There was also a panel on Afrobeat – What’s Next for African Music, another panel on the protection of African creativity – best practices in intellectual property and a complement of live performances by some of the best African talent.

“We have been dedicated to aggregating and allocating opportunities to an ever-growing community of directors of up to 40 independent East African filmmaking teams.

We have awarded grants ranging from $2,500 to $23,500. “Gathee said. With the opportunity to forge links with global players in order to attract more funding, as some films expected under his banner, had already stood out on the world stage through awards and distinctions, which Softie, winner of the Sun dance 2020; The Letter, official selection at IDFA 2019, and New Moon, winner at DIFF 2018, as well as Morning After, Dogorizer and Thank You For The Rain which had been recognized worldwide.

Yusuf Mahmoud, founder and director of the Sauti Za Busara Festival, Zanzibar, told attendees that after 23 years in Zanzibar, building lasting bridges and partnerships in the industry remains an ongoing challenge.

Cornelia Glele, director of the Cotonou International Women’s Film Festival, stressed that the language barrier was one of the main challenges for creatives in Benin. Glele said the language barrier is hampering global expansion and forcing the member industry to thrive only in their own country. country.

Les Allen, founder of the ICON festival in South Africa, called on creatives to take advantage of digital platforms to advertise and sell their products, arguing that it is no longer about physical encounters and interactions as the world was now digital, he said.”

Computer games, comedy stories and animation are the new language of wealth in creative platforms. Oscar “Oskido” Mdlongwa, a South African artist and record company owner with nearly three decades of industry experience, observed that music had entered the digital realm. “It’s no longer about printing CDs, it’s not even about broadcasting on the radio. Your music should be marketed and sold online. Streaming services and social media are the new profitable vehicles.

“The music industry has evolved and emerging artists and former players need to be educated in new technologies.

Antos Stella, owner of an independent music label, stressed the need for a collaborative approach from musicians in Africa to establish an African streaming service that would set African standards and African benchmarks for the monetization of digital platforms. Stella said such an approach would see more artists being successful.

Audu Maikori, founder of Chocolate City Entertainment, Nigeria, argued Africans should think “local first, then global” as a strategy to empower the industry.