CORRUPTION: BUHARI HAS RECOVERED N1 TRILLION FROM ABACHA AND IBORI 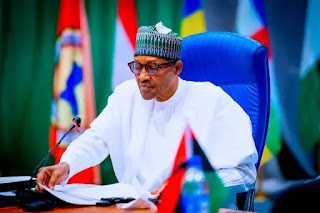 The All Progressives Congress APC Legacy Awareness and Campaign, a voluntary think-tank of the governing party, has disclosed that under President Buhari’s watch the Federal Government has recovered about N1 trillion of stolen funds and assets since he assumed office in 2015.

The group in a statement issued Friday in Abuja said the Buhari Administration has prioritized the recovery and return of stolen assets belonging to the Nigerian people.

“One of the first things the President did upon assumption of office was the establishment of the Presidential Advisory Committee Against Corruption (PACAC), which has helped expand technical capacity within Nigeria’s anti-corruption agencies, as well as within the Judiciary.

“Since the President assumed office in 2015, close to a Trillion Naira worth of stolen funds and assets have been recovered in all. All final forfeitures are being deployed for use in the Government’s special Infrastructure and Social Investment Programmes, or put into the annual Budget”, the group stated.

READ ALSO: INSECURITY: EL-RUFAI BAN TRANSPORTATION OF LIVESTOCK FROM OR TO KADUNA

It listed some high-profile recoveries to include the $322 million Abacha Loot from the Government of Switzerland; $311 million Abacha Loot from the Bailiwick of Jersey; $100 million recovered by the EFCC for the Nigerian Ports Authority (NPA), from a company operating in the oil and gas sector; 4.2 million pounds sterling of Ibori Loot from the UK Government; 53 billion Naira for the Federal Mortgage Bank of Nigeria (FMBN), from a real estate developer; $43 million security funds from an apartment in Ikoyi; and 189 billion Naira in ‘restrained’ funds from inflated personnel budgets, following ICPC’s scrutiny of practices, systems and procedures of MDAs’ personnel cost from 2019 to 2020. Billions of Naira in pension funds have been recovered from local and foreign Insurance Companies who have been holding on to assets of the Pension Transitional Arrangement Directorate (PTAD).

“ICPC’s audit of Constituency Projects covering 2015 to 2018 helped recover 2 billion Naira of diverted funds and assets, and also forced about 300 contractors to return to site to complete abandoned or poorly-executed projects. In August 2021 the ICPC commenced the third Phase of this Constituency and Executive Projects Tracking Exercise. In 2019 alone, ICPC also recovered 32 billion Naira worth of Land, Buildings and Vehicles. In 2021, the EFCC and ICPC have continued their recovery efforts, with billions of Naira in cash assets already recovered, either through Interim or Final Forfeiture Orders.

“The most recent Abacha and Ibori Loots were transferred to the Nigeria Sovereign Investment Authority (NSIA), for transparent management under the Presidential Infrastructure Development Fund (PIDF).

VAIDS was followed by the launch of Project Lighthouse in 2018, by the Federal Ministry of Finance, as a data-mining initiative that aggregates tax, income and asset data from individuals and companies, enabling the Government to have a full picture of levels of tax compliance. So far Project Lighthouse has identified debts in excess of 5 trillion Naira, owed the Federal Government by individuals and corporate entities, with recoveries ongoing”, the group stated.