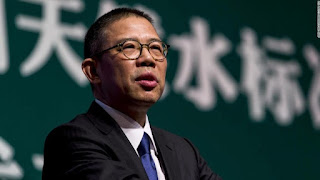 Zhong Shanshan is officially the richest man in China, according to the Bloomberg Billionaire Index.

A few months ago, the entrepreneur behind the Nongfu Spring mineral water and the Wantai Biological Pharmacy Enterprise in Shanghai surpassed Alibaba’s Jack Ma ($ 38.7 billion) in fortune.

Shanshan’s net worth has now reached $ 77.5 billion. He can buy 43.4 million troy ounces of gold or 1.05 billion barrels of crude oil with his net worth.

The Chinese bottled water billionaire has made huge strides over the years. According to experts, Shanshan’s fortune increased due to the following factors:

1. The Covid19 test kits were in great demand, which benefited their pharmaceutical company.

2. Last year, the shares of Nongfu Spring and Wantai Biological Pharmacy were floated on the stock exchange.

Chinese company Nongfu Spring is responsible for most of the Chinese billionaire’s fortune, which comes from his 84% ​​stake. Hong Kong-listed company went public on September 20, 2020.

Hangzhou Youfu and Yangshengtang are investment vehicles owned by Zhong, according to the company’s 2020 Annual Report.

Nongfu Spring’s valuation was revised when it was released on September 8, 2020. The result was an increase in the net worth calculation of $ 32 billion.

A hepatitis test kit manufacturer in China, Beijing Wantai Pharmacy Enterprise, is also part of Zhong. In the company’s 2021 semi-annual report, it holds the stake both directly and through Yangshengtang.

Hangzhou, a city in eastern China, is the birthplace of Zhong. The newspaper reports that he failed the university entrance exams twice before enrolling at China Open University in the late 1970s.