BBNAIJA: MARRIED HOUSEMATE TEGA AND BOMA’s INTIMACY EXPOSED; TEGA SAYS I WOULD HAVE DONE MORE IF I WAS SINGLE 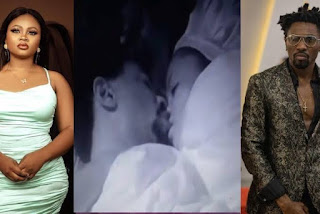 Big Brother Naija housemate, Boma has expressed that he’s thrilled and would want to keep enjoying the romantic escapades with a married housemate, Tega in the house.

The duo has been trending on the Internet for days for their intimate activities under the sheets.

READ ALSO; LOVE DOES NOT GUARANTEE THE SUCCESS OF MARRIAGE BUT KNOWLEDGE DOES; DR. MILES MONRUO ONCE REVEALED

While many questions the morals of Tega who’s a married woman, more videos of their escapades are going viral.

In one of such videos, Boma was seen kissing Tega and he also picked up a tissue.

However, while discussing their escapade, Boma has described the lovely episodes as a Tornado and also noted that he’s more than willing to do more than 5 rounds with the married woman.