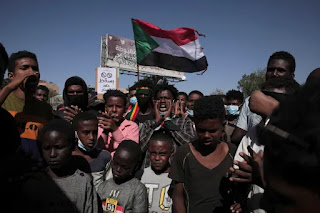 The move was the biggest concession made by the military since its October 25 coup but leaves the country’s transition to democracy mired in crisis. Prior to the takeover, Sudan’s transitional government was composed of the Sovereign Council, a joint military-civilian body headed by al-Burhan, and a civilian cabinet led by Hamdok.

Sudan’s pro-democracy movement dismissed the agreement as falling short of their demands for full civilian rule and accused Hamdok of allowing himself to serve as a fig leaf for continued military rule. The military was due to hand over the sovereign council’s leadership to a civilian in the coming months.

Mohamed Hamdan Dagalo, who remained deputy head of a new, al-Burhan-headed Sovereign Council that was formed after the coup, told Al Jazeera the military takeover followed long discussions between political parties which failed to produce results.

“What happened on October 25 was the ultimate outcome of a long process since change started in Sudan. During the process, many discussions were made and many initiatives were proposed by various parties,” Dagalo, widely known as Hemeti, said in an interview.

“The prime minister himself proposed two initiatives and during our meetings … we made maximum efforts but we couldn’t reach a breakthrough. At that point we were left with three options, the best of which was the move we had taken.”