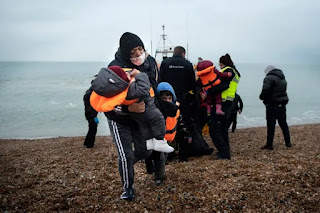 At least 31 refugees and migrants died trying to cross the Channel from France to England when their dinghy sank off the north coast of Calais.

A joint Franco-British operation was underway Wednesday evening to search for survivors. At least three boats and three helicopters were deployed to help with the search, local authorities said.

The United Nations Migration Agency, the International Organization for Migration (IOM) defined the accident the greatest loss of life in the chain since it started collecting data in 2014.

More people left France’s northern beaches than normal to take gain of calm sea situations on Wednesday, even though the water turned into bitterly cold, the Reuters information employer reported, mentioning fishermen. One fisherman known as the rescue offerings after seeing an empty dinghy and those floating immobile nearby.

“My mind are with the numerous lacking and injured, sufferers of crook smugglers who make the most their misery and misery,” he wrote in a tweet.

French President Emmanuel Macron introduced that at the least 31 humans had died and stated his us of a might now no longer allow the Channel emerge as a cemetery.

French Interior Minister Gerard Darmanin stated 5 girls and a lady had been most of the 31 dead. He stated humans have been rescued.