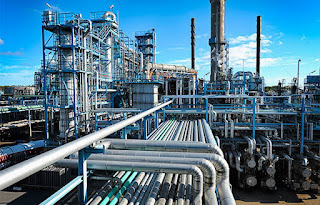 Despite producing nothing and adding zero value to the nation’s economy, the Federal Government has continued to pay the salaries of about 5,000 workers operating in the nation’s ailing refineries and Ajaokuta Steel Complex.

With 1,898 staff strength, the refineries’ workers represent about 28.7 per cent of the Nigerian National Petroleum Corporation (NNPC) group’s total workforce domiciled at the Kaduna, Port Harcourt, and Warri refineries.

Though details of the workers’ emoluments are yet to be ascertained, the government has been incurring huge costs to keep the workers operating at the wasting assets.

Similar to the refineries in the stalled Ajaokuta steel plant located in Kogi State, with estimated staff strength of 3,000.

While successive governments have plunged about $8 billion into the complex since 1979, the Federal Government has been spending N2 billion on payment of staff salaries every year for not producing. The $8 billion structural investment has never produced a single bar of steel since reaching 98 per cent completion as far back as 1994.

Some experts have said that keeping most of the workers employed for doing nothing does not contribute anything significant to the economy and to their professional development.

The report by NNPC further showed that the refineries lost N123.25 billion between January and October 2019; while KRPC posted a loss of N49.3 billion, PHRC and WRPC lost N36.7 billion and N37.24 billion respectively.

Findings showed that in the past five years, about N1.47 trillion was spent by the Federal Government on maintaining, revamping, and running its three moribund refineries between 2015 and 2020.

The NNPC also incurred a loss of N473.3 billion in operating the refineries between January 2015 and February 2021 operating the three refineries, as claimed in a report by SBM Intelligence, a geopolitical and socioeconomic research firm.

He, however, said most of the workers have been moved to other Service Business Units (SBUs) that are functioning very well, adding that when the refineries come back on stream, they will bring back all the workers from their various SBUs to run the refineries.

Similarly, the union’s secretary-general, Lumumba Okugbawa, also noted that the refineries’ workers, who are highly skilled, should not be made sacrificial lamb as they have put in their best to ensure the refineries work.

“As unionists, our job is to defend our workers, they should not be made the scapegoat of bad administration. You have to go to the root cause to solve the problem, otherwise, the next workers too will be punished for doing our job, because we did not fight on their behalf. It doesn’t mean that when you have a challenge you now throw all of them into the market and when the need arises, you will be looking for them to hire,” he said.

President of the Association of Senior Civil Servants of Nigeria (ASCSN), Dr. Tommy Okon, blamed the idle refineries on the government’s unstable policies. He noted that the government was not being sincere, if not, importation of petroleum resources would have been a thing of the past.

According to him, “a worker deserves his wage. What will it take us to make our refineries work? If an individual can build a refinery, which is near completion, I don’t think it is a difficult thing for the government to fix. Government needs to look at the operational feasibility of the policy, rather than the political feasibility that is derailing its operation.”

On the union’s position, he added: “Our workers should be paid because it isn’t the workers that cause the government not to fix refineries. You cannot send the workers away. Workers are ready to work and you cannot because of your negligence fail to pay them.”

Public Affairs Analyst, Jide Ojo, said sacking the workers would compound the unemployment rate in the country. He said the way forward was for the government to redeploy them to other areas, parastatals, or the parent ministry of petroleum resources.