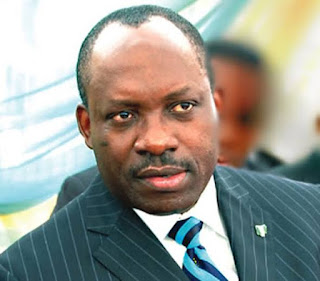 Former Governor of the Central Bank of Nigeria Professor Charles Chukwuma Soludo has been indicted over his role in the $462 million scam involving Federal Government’s investment in the African Finance Corporation (AFC) during the previous administrations of former Presidents Olusegun Obasanjo and UmaruMusa Yar’Adua.

Prof. Soludo according to sources available to pointblanknews.com also divested a huge chunk of the money to acquire properties in the United Kingdom and Nigeria between 29th May, 2004 – 29th May, 2009.

The report was submitted through the office of the Attorney General of the Federation (AGF). Soludo was the Chairman of the African Finance Corporation; the report indicted the Central Bank boss based on some salient grounds.

According to the report which NEWSWAY sighted, the committee found Prof. Soludo liable for gross negligence, recklessness and gross abuse of office.

“The committee also observed that the AFC has not been able to compute the expenditure incurred to generate income in order to net off and determine the amount payable to the FGN. In view of this inconclusive and unhelpful state of affairs, the committee is of the opinion that Prof. Soludo and the CEO of AFC Mr. Austin Ometoruwa should be personally acountable for the determination of the actual interest that has accrued to the CBN/FGN from the investment in AFC, and ensure its prompt payment.

“It is also alarming that funds invested by CBN in AFC found its way to UBA New York and Citibank London only to be repatriated to Nigeria after a few weeks. This constitutes round tripping which is a serious criminal offence with attendant consequences under the money laundering Act. Government should take appropriate action against Charles Soludo and Austin Ometoruwa who are instrumental to this action.

“It is also in the report that the duo of Prof. Soludo and Mr. Ometoruwa were in BREACH OF DUE PROCESS BY TRANSFERRING THE INITIAL HUGE SUM OF $USD750,000,000.00 (SEVEN HUNDRED AND FIFTY MILLION UNITED STATES DOLLARS ONLY) and $USD143,000,000.00 ( ONE HUNDRED AND FORTY THREE MILLION UNITED STATES DOLLARS ONLY) in November 2007 and March 2008 respectively out of the country to CITIBANK LONDON and UBA NEW YORK without the benefit of the Board approvals either by the CBN or AFC. We strongly recommend that Government should take appropriate action against the two officers commensurate with the gravity of breach.

READ ALSO; $51,000 WORTH OF BITCOIN TRADED AS EL-SALVADOR ADOPTS CRYPTOHh

“Prof. Soludo Should be held accountable for the rot in the Central Bank of Nigeria and the financial sector. His tenure should be probed and if found wanting arraigned in court and prosecuted.”

One of the reasons on which ICPC was said to have pinned Soludo was the movement of funds from the Central Bank of Nigeria into AFC account in November 2007 without the knowledge of President Umaru Yar’Adua. It was true the Central Bank Governor received the approval of former President Olusegun Obasanjo to pay money into the account of the AFC before he left office on May 29, 2007, but added that Soludo actually funded the account in November, five months after the exit of Obasanjo, without informing President Yarâ’Adua.

NEWSWAY investigation revealed that Soludo started funding AFC even when the other member countries that are supposed to be members of the Corporation were yet to ratify the memoranda. The only countries that have signed, Guinea Bissau and Sierra Leone, did so this past April.

In view of the above, the Central Bank Governor was invited to the headquarters of ICPC where he appeared with some other management officers of the bank and for over four hours was grilled by a special team said to have been raised by the Secretary to the Federal Government Baba Gana Kingibe.

The panel was led by an Assistant Commissioner of Police, Tunde Ogunsakin, who is also the head of Investigation of ICPC. Also on the panel are former Director-General of the Bureau of Public Enterprises, B. Verr, Pius Oteh from the Ministry of Justice who is serving as Secretary of the team, Oshibote E, from the office of the Accountant General of the Federation and Mohammed Garba from the office of the Secretary to the Federation.

Soludo was asked to explain what happened to the funds invested by Nigeria in the AFC. After interrogating the Central Bank boss, the Commission wrapped up its interim report which was sent to the president.

The CBN Governor told the panel that the US$462million spent by the apex bank was to set up the AFC and that it was sourced from government bonds. Soludo also said that apart from Nigeria’s contribution, over US$800million has been raised internationally for the Corporation.

Before his emergence as the CBN Governor, Soludo spent all his working years at the University of Nigeria Nsukka and was later appointed a Presidential aide. But on his appointment, Soludo became super rich and has bought properties including a five star hotel in Enugu, a number of buildings both in Abuja and UK.

Mr.Soludo’s residence on 14 Daresalam Street, Wuse 11, Abuja is one of the most expansive compounds in the capital. The cluster of buildings in the complex is hidden behind a tall fence, which appear to be well in excess of municipal requirements of a maximum height of 1.5 meters.

The more intriguing aspect of the building is how Mr. Soludo got the Obasanjo federal executive council to approve his purchase of what is properly the CBN governor’s official residence. It is a situation similar to Sunday Ehindero’s purchase of the Inspector General of Police’s residence which has since been reversed. Mr. Soludo made an elaborate security excuse that allowed him to get the approval to purchase the house for N200 million. CBN sources said another N100 million was used to renovate it to his taste.

An  Upper Area Court, Zuba, Abuja is presently hearing a direct Criminal Complaint brought by one Oliver Bitrus pursuant to Sections 88 and 89 of the Administration of Criminal Justice Act 2015 against Soludo

According to court documents, the complainant, Oliver Bitrus, alleged that between the period Prof. Soludo held office as a Public Officer he flagrantly breached the Code of Conduct for Public Officer by buying or acquiring interest in a property known and described as No. 50 Brondesbury Park, London, NW6 7AT, United Kingdom. The property is covered by File Plan of Tile No. MX362301.

Mr. Oliver claimed that this property, was bought or acquired using a proxy and/or nominee company known as Universal Energy Company Limited, and which investigation revealed was incorporated in the Isle of Man; and now used to round-trip public funds for the purchase. As a matter fact, purchase price of £2,150, 000 was paid on 20th October, 2006 in a single tranche, which sum was not fairly attributable to his income as the Governor of the Central Bank of Nigeria at the material time.

Further investigation also disclosed that presently, the property is being occupied by defendant, his spouse and children and used as their personal and official addresses for all their companies and other business undertaking.

The Complainant listed companies owned and operated by the Soludo’s and domiciled at the said property to include ” ZINORA LIMITED: A private company owned by Mrs. Nonye Soludo (spouse of Chukwuma Charles Soludo). This is company limited by shares which was registered on 29th January, 2013 with Company N: 8379214 and also has its registered office at No. 50 Brondesbury Park, London, NW6 7AT, United Kingdom.

“The SOLUDO FOUNDATION: Registered on 24th July, 2014 as a private company limited by guarantee with its registered office at No. 50 Brondesbury Park, London, NW6 7AT, United Kingdom. It also has the Company No: 9145134. The company has the following persons as members or directors – Nonye Frances Soludo, Chukwuma Soludo, Ozonna Tochukwu Soludo, Ifeatu Adaora Nnenna Soludo etal with having the above mentioned property as their address.

“ALLSTERS INVESTMENT LIMITED: Registered on 2nd September, 2015 as a private company limited by shares with Company No: 9757553. It has its registered address at the same No. 50 Brondesbury Park, London, NW6 7AT, United Kingdom and also has the following persons as Directors – Mrs. Nonye F. Soludo, Miss Ifeatu Adaora Nnenna Soludo, Mr. Ozonna Tochukwu Soludo and Mr. Chinua Belolisa Naeto Soludo with all the directors having the property in issue as the address.”

The Claimant further claims that a sequential trail of evidence has revealed that while holding public office as the Governor of the Central Bank of Nigeria, the defendant abused his office and breached the Code of Conduct for Public Officers by using a proxy, nominee or trustee company – Universal Energy Company Limited, incorporated in the Isle of Man for syndication of fund, to acquire the property and deliberately failed to declare the said property or his obvious interest therein in his Assets Declaration Form submitted to the Code of Conduct Bureau. As a result, he flagrantly violated Article 11 of the Part 1, 5th Schedule to the Constitution of the Federal Republic of Nigeria, 1999 (as Amended) and thereby liable to the penal sanction of disqualification from holding any other public office for a period of 10 years and forfeiture of the illicit property to the Federal Government of Nigeria pursuant to Article 18(2) of the Law.

Prof. Soludo is presently in his third attempt to govern Anambra state in November 6 governorship election. Billions of Naira have already been sunk into the project and Nigerians are already wondering the real source of his stupendous wealth.