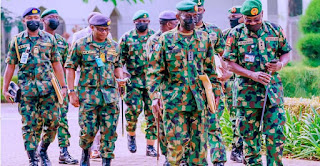 A total of 233 high-ranking military personnel were promoted by the respective military boards.

The Nigerian Army Council raised 117 officers, 41 of whom were promoted to major general and 76 colonels to brigadier generals.

The Nigerian Air Force Board and Council announced the promotion of 60 senior officers, while 56 senior Nigerian Navy officers were promoted in a similar fashion.

The announcement of the promotion of 116 senior naval and air force officers came after a meeting chaired Tuesday by Defense Secretary Maj. Gen. Bashir Magashi, retired from a Nigerian Navy promotion breakdown that found 35 captains promoted to Commodores, while 21 Commodores were also promoted and Rear Admirals were promoted.

For the Nigerian Air Force, a total of 60 high-ranking officers, including 29 vice marshals and 31 air commodors, were also promoted to the next higher ranks.