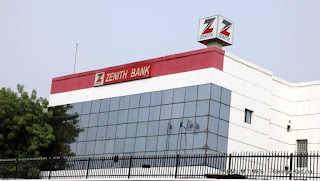 Zenith Bank Plc has announced a Profit Before Tax (PBT) of N180 billion for the nine months period ended 30 September 2021, reflecting a one per cent growth over the N177 billion recorded in the same period in the previous year amidst a challenging macro-economic environment exacerbated by the Coronavirus (COVID-19) pandemic.

According to the group’s un-audited nine months financial results presented to the Nigerian Exchange (NGX), gross earnings increased by two per cent from N509 billion to N519 billion, largely due to growth in current account maintenance fees as well as fees from electronic products during the period.

Despite continuing economic uncertainties, the group grew its net earnings through a reduction in the cost of funds while keeping the cost of risk flat.

This strengthened Earnings Per Share (EPS) by one percent to N5.11. The group achieved a nine per cent growth in interest income from loans and advances on the back of an increase in gross loans of nine per cent year to date and enhanced efficiency, resulting in a 21 per cent drop in interest expense to N74 billion from N94 billion.

This culminated in growth in net interest income of four per cent, from N225 billion recorded at the end of third quarter (Q3) 2020 to N235 billion in the current period.

Total assets also increased by three percent to N8.8 trillion in the current period, while total deposits grew by 13 percent to close at N6 trillion from N5.3 trillion as at December 31, 2020, with a substantial contribution from retail deposits.

As a result of the focused drive to increase retail deposits in the past three years, there was a decrease in The Group’s cost of funds by 35 percent to 1.4 percent from 2.2 percent year-on-year.

The Group continues to make significant progress in its retail banking drive, as evidenced by remarkable growth in transaction volumes and value across its digital platforms and strong growth in customer acquisition.

The Group remains focused on increasing its retail market share, consolidating its leadership position in the corporate segment and maintaining a robust balance sheet.