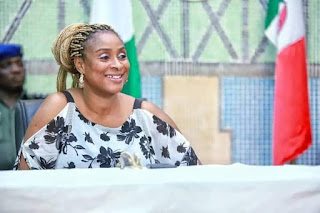 The State Working Committee of the People’s Democratic Party, PDP, Benue State Chapter, under the leadership of Sir John Ngbede has fixed this Saturday, 7th August 2021 for the decamping ceremony of one of the major pillars of the opposition party in Benue State, Chief Mrs Mimi Adzape Orubibi , who was the senatorial candidate of the All Progressive Congress, Zone A, in the last general elections .

According to a statement by chief John Akperashi, Chairman Publicity Sub-Committee, the governor of Benue State , His Excellency, Samuel Ortom who shall be accompanied by Senator Gabriel Suswam, Dr Iyorchia Ayu among other Major stakeholders shall be on ground to receive Chief Mimi Orubibi Adzape with her thousands of supporters into the PDP .

The Statement enjoins all party faithfuls across the state to grace the occasion which shall commence by 12 noon at ACC Adikpo Playground, Kwande Local Government.