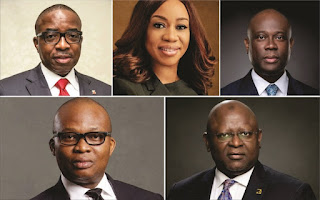 The market capitalization of the top five banks, referred to as the Tier-1 banks or FUGAZ, appreciated by 2.23% to close at N2.69 trillion as at 4th of February, 2022, as investors in these banks gained a total of N58.6 billion during the trading week.

According to data from the Nigerian Exchange (NGX), the market capitalization of the top five banks advanced to N2.69 trillion, appreciating by 2.23% during the week.

United Bank for Africa Plc grew by 1.18% as its market capitalization closed the week at N292.41 billion, with its share price standing at N8.55.

GTCO Plc appreciated by N54.45 billion after its market capitalization appreciated to N809.36 billion from N754.91 billion at the end of the week’s trading session.

The growth can be attributed to the increase in its share price, from N25.65 traded at the end of last week, to N27.50 as at close of business, reflecting an increase of 7.21%.

Access Bank Plc’s share price appreciated by 3.55% to close the week at N10.20, and the market capitalization stood at N362.56 billion.

Zenith Bank Plc gained N18.84 billion w-o-w after its market capitalization appreciated to N827.30 billion from N808.46 billion at the end of the week. This appreciation can be attributed to the 2.33% growth in its share price, from N25.75 traded at the end of last week, to N26.35 at the end of this week.

The FUGAZ banks make up over 70% of the NSE Banking sector index, hence, strongly influencing the growth or otherwise of the index; hence, the NGX banking grew by 0.83% from 439.44 to close at 443.10 points.