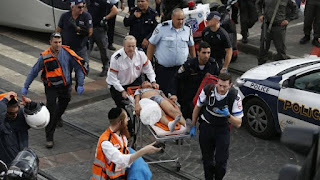 Palestinian officials and human rights groups have condemned the murder of a Palestinian  after carrying out a stabbing attack in occupied East Jerusalem.

Israeli police  released surveillance video  of the attack site near Jerusalem’s Old City on Saturday. In the footage, the Palestinian, identified as  Mohammad Salima, 25, appears to stab an ultra-Orthodox Jewish man, then approaches an Israeli policeman before being shot and falling to the ground. Other footage shot by passers-by appeared to show Israeli police  continuing to shoot Salima at point blank range as she lay on the ground and did not appear to pose a threat.

Israel’s Magen David Adom said the stabbed victim was a 20-year-old man who was hospitalized in “moderate to severe condition”.

The United Nations Office for Human Rights (OHCHR) said it was “shocked by the apparent extrajudicial execution”, shows Mr. Sleemah attacking a passerby and a policeman with a knife before being shot and overpowered.

While on the ground and wounded, Israeli forces shot and apparently killed Mr. Sleemah twice, “the result of the regular use of lethal force by well-alerted and well-protected Israeli security personnel,” a Palestinian statement said Almost total lack of responsibility for the killings and injuries of Palestinians by the Israeli forces, in this case all responsibility is assumed if the case is further monitored.