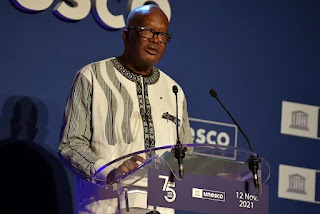 Hundreds of protesters took to the streets of Burkina Faso’s capital on Tuesday demanding President Roch Kabore resign for failing to rein in militants who roam the north and east and last weekend killed 28 soldiers and four civilians.

Sunday’s attack was the worst suffered by troops during a four-year Islamist insurgency that has killed thousands and forced more than a million people to flee their homes. An attack in the area two days earlier killed seven police.

“We are sending our brothers, our children, our uncles to the slaughterhouse. How many widows and children are there in Burkina? Who will take care of it?” said protester Hermann Tassembedo.

About 300 marched along the streets of central Ouagadougou, calling for Kabore to go and demanding the departure of French forces that patrol the West African country in search of the Islamists.

Many see the presence of European troops in Burkina Faso and neighbouring Mali and Niger as a lightning rod for attacks. Burkina Faso had for years been spared the jihadist violence seen across the border in Mali.

Former president Blaise Compaore managed to keep good relations with the region’s Islamists, but he was driven from office in 2014 and the country became a target. Now much of the arid, rural north and east are overrun by armed groups.

Thousands of schools have closed and displaced farmers cannot reach their crops. Malnutrition blights the north.

“We are simply asking Kabore to leave,” said one protest organiser, Mohamed Komsongo. “He has shown his incompetence since coming to power. He has failed on the security front. We have too many deaths.”