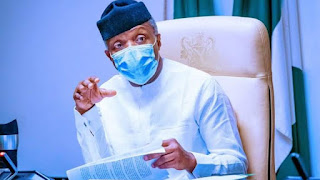 The vice president made this submission on Saturday in his address at the graduation Ceremony of the Executive Intelligence Management Course (EIMC) 14, 2021 of the National Institute for Security Studies, Abuja.

Osinbajo, who was the Special Guest of Honour, said it had become imperative to reinvent the institutional culture of Nigeria’s security and intelligence agencies.

He tasked the intelligence community to be proactive, adopt the use of imagination and leverage technology in reacting to threats.

“It is the unpredictable events that we must be prepared for; we must try especially because we have been given the responsibility to think ahead of a nation of this size and of this complexity; it falls upon our lives to plan ahead and to be imaginative.

“It is not enough for intelligence services to anticipate the threat that we have a clear line of sight to; indeed, given the resource constraint that we face, we cannot afford to wait for the threat to become manifest dangers before we react.

“Our intelligence services must be proactive rather than reactive; ahead of the curve, rather than behind it, threats must be identified and addressed well before they evolve into manifest spheres.

“It is a very heavy burden indeed; but the truth is that the intelligence community, by the very nature of its mandate, is charged with being several steps ahead of the rest of us.

According to him, if there is any gift or skill that should define the intelligence officer of this new age, it is imagination.

He said that being able to think in terms of multiple opportunities, alternative scenarios, variables and possibilities were critical for an intelligence officer.

“Imagination is also a function of what you read; what you listen to; what are you reading right now? Have you read the latest books on the dark web or the activities of global criminal networks?

“Are you intensely, constantly acquainting yourself with the most up to date thinking and knowledge in the security sector?

“The knowledge economy and information age is characterised by constant innovation and it is moving swiftly; it is so fluid that conventional wisdom is becoming obsolete every single day.

“The security and intelligence sector is not exempt from all the dynamics that face our world day.’’

Osinbajo said that the point of constant learning was not only to keep in touch with current trends in the space but also to enhance abilities and capacities to identify the threats that lied beyond the horizon.

“But I must say that perhaps the most critical area is that we must reinvent the institutional culture of our security and intelligence agencies.

“ Our security and intelligence agencies must adopt a culture that is empirical, data-driven, analytical and defined by forensic rhythm.

The vice president said that the administration had not shied away from investing in the security and intelligence sector.

He said that President Muhammadu Buhari recently approved a supplementary budget to meet the special needs of security and intelligence agencies.

“ In May this year, arising from the deliberations of the National Security Council, the president established the committee on Needs and Assessment of National Security Requirement and he mandated that committee to look at all of the special needs of defence, security and intelligence agencies in the light of the current challenges and to recommend options for containment.

“The president personally handpicked the membership of that committee and which had representations from the military, the police, the security and intelligence agencies and he asked me to chair it.

“As a result of the work of the committee, the president signed the supplementary budget to the tune of N802 billion for the military, security and intelligence agencies and for their special needs.

“This was in keeping with his commitment, since the onset of his administration, that he will ensure that those charged with keeping Nigeria safe, are adequately equipped for the job,’’ he said.

In her remarks, the First Lady, Mrs Aisha Buhari, said the ceremony came at a time Nigeria was in dire need of high profile security personnel in tackling its security challenges.

Earlier in an address, Yusuf Bichi, the Director-General, State Services, congratulated the graduands describing them as change agents.

Bichi urged them do everything possible to reverse the current security challenges confronting the nation.

The high points of the event were the conferment of Fellow of the Security Institute (FSI) on the 66 graduands and the presentation of certificates and awards to outstanding participants.