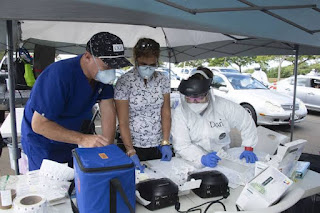 The US states of New York and Hawaii have reported their first cases of the Omicron variant, as the United States brought in new measures to combat COVID-19.

New York became the fourth state to confirm cases of the new strain, while Hawaii is the fifth with a total of at least 10 cases now reported around the US, including a second case in California.

A person with symptoms gets tested for COVID-19 at a drive-up testing centre in Columbus, Ohio, December 2, 2021

The new rules to tackle COVID-19 in the US include stricter testing of inbound travellers and stepping up booster jabs.

Germany is planning to exclude the unvaccinated from all but essential shops and services, and is considering a vaccine mandate from February.

Malaysian Health Minister Khairy Jamaluddin announced on Thursday that the country has detected its first case of the Omicron coronavirus variant.

Khairy said the case was detected in a foreign visitor from South Africa who arrived in Malaysia through Singapore on November 19.

He said that the eight close contacts of the visitor will immediately undergo PCR swab tests on Thursday.

South Korea announced on Friday that people visiting restaurants, cinemas and other public spaces will have to show vaccine passes starting December 6, amid a surge in COVID-19 infections and five confirmed cases of the Omicron variant.

The government also re-imposed limits on private gatherings, which had been recently relaxed, as the country posted record numbers of new cases this week.

Panama has announced that it would temporarily ban the entry of travelers from eight African countries due to concerns over the spread of the Omicron COVID-19 variant.

The restriction applies to travelers who have been to South Africa, Botswana, Eswatini, Lesotho, Mozambique, Namibia, Zimbabwe or Malawi within a two-week period, Panama’s government said in a statement.

Panamanians and residents of the country who are vaccinated must present a negative COVID-19 test within 72 hours of arriving in the country, while those who are not inoculated must place themselves in “preventative quarantine,” the government said.

The US state of California is reporting its second confirmed case of the Omicron COVID variant in as many days.

The Los Angeles County public health department says a county resident is self-isolating after apparently contracting the infection during a trip to South Africa last month.

Additional cases were reported Thursday in the New York City area, Minnesota, Hawaii and Colorado bringing the total number of confirmed cases in the US to at least 10.