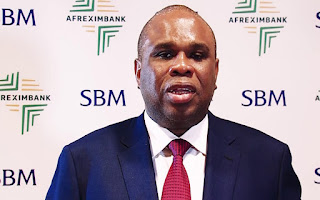 African ExportImport Bank (Afreximbank) has signed a $ 1.04 billion contract with Nigerian National Petroleum Corporation (NNPC) Ltd to finance oil exploration. 2021, which stated that the agreement was concluded in Durban on Tuesday during the second Intra-Africa Trade Show (IATF 2021), which will be held from November 15-21, 2021.

Afreximbank noted in the statement that The Transaction – Export / Shipping Finance Facility, backed by a Forward Sale Agreement (FSA) and sales contracts from NNPC, which acts as both a borrower and a seller.

Afreximbank said in the statement that the proceeds from the facility would increase tax revenues and foreign exchange revenues by more than $ 2.4 billion. with the Nigerian National Petroleum Corporation (NNPC) to finance oil exploration.

The deal was struck yesterday in Durban at the Second Intra-African Fair, which opened on November 15 and will last until November 21.

The NNPC would enter an FSA to deliver 35,000 barrels of crude oil per day. The plant’s proceeds would increase tax and foreign exchange earnings and create thousands of jobs in the oil and gas refining value chain, all for more than $ 2.4 billion to the immediate benefit of the government. government, thus improving the trade balance and the domestic gross. produced in Nigeria, Africa’s largest economy.

The agreement was signed by Umor Ajia, executive director of NNPC and managing director of the group, on behalf of NNPC The agreement is in line with Afreximbank’s mandate to promote local content in the African oil and gas industry and to other mining industries and generate foreign credits in Africa.

Afreximbank Chairman and Chairman of the Board, Professor Benedict Oramah, called the deal very innovative and explained that the bank’s decision came against the backdrop of the global climate change agenda. . He said: “This is about taking a balanced approach.

Africa is more a victim than a culprit in the emission of destructive greenhouse gases, contributing only a meager four percent, while the majority of the continent, ironically, has been left behind. from development, it still has to depend on fossil fuels to survive.

“So they should not bear the burden of punishment for the mistakes of others. Stop the development of parts of Africa today to achieve a clean environment for the whole world tomorrow is absolutely reckless”.

This recent development will serve as a huge boost in NNPC’s quest to become a globally recognized business entity and attract more funding and investment to the industry. Recall that in May 2021, the state-owned oil giant signed an agreement with some of the largest oil companies in the world that could unlock more than $ 10 billion in investments in an offshore oil field.