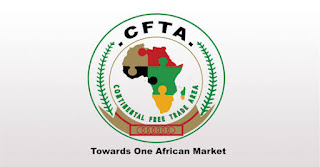 The  African Continental Free Trade Agreement (AfCFTA) National Action Committee has stressed the need to scale down its activities to the sub-national level, with state governments playing an important role.

Committee secretary Francis Anatogu said  Monday at a joint press conference with the Nigeria Governors Forum (NGF) in Abuja on the AfCFTA subnational strategy seminar to be held on Tuesday in Abuja, said that for the AfCFTA to be a real success in Nigeria, it is absolutely necessary to work with states to find their niche in Africa’s export market.

“We cannot do this without improving the capabilities of our people,” he said.

According to him, the first of the strategic objectives of the implementation plan is to increase the export capacity of each state by an amount of $ 1.2 billion with a focus on products where there is a competitive advantage.

He stressed that the subnational strategy workshop would serve as an intervention that would put the nation on track to make the AfCFTA goal a reality for Nigeria.

“Over the next three days,  NACAfCFTA will create a platform to engage and interact with the technical working groups of the states that are expected to be in attendance.”

This with the aim of reaching an understanding of the adaptation of their economic and development plans to include the requirements of the AfCFTA.

“There is a need to ensure that the groups are aware of the support available from the federal government and lay the groundwork for a unique vision and strategy between the federal and state governments to advance the AfCFTA agenda in Nigeria.

“The AfCFTA agreement, whose main objective is to promote export trade, deepen the continent’s economic integration, create a single market for goods and services with the free movement of Africans and investments between member countries, entered into force on January 1, 2021.

“This agreement aims to eliminate 90% of tariffs and reduce non-tariff barriers to improve intra-African trade and form the basis for the creation of a  customs union mainland, creating the largest single market in the world.

The country’s aspirations for industrialization and position to be a destination market for goods and services of the highest standards (finished or not) for the 1.2 billion consumers that this agreement has brought to our doorstep.

“Traditionally, over 80% of Africa’s imports come from Europe, Asia and the Americas. “For us, with Nigeria  greatly endowed with  natural and human resources, the AfCFTA initiative is to look inward to push out,” he said.

For his part, the director General of the NGF Secretariat, Mr. Asishana Okauru, said that after the seminar, states should have an overview of what needs to be done to make the AfCFTA a reality in Nigeria.

Okauru said that one cannot overstating the essence of presenting the AfCFTA agenda to states. “We need buy-in from states, local governments and without trade, we can’t go far as a nation.

be overrated. “We need the consensus of states, local governments and without trade we cannot go far as a nation. would be for each TWG (Technical Working Group), to leave with the mission of making their condition an integral and initial link in a value chain. growth in revenues generated internally by the State.

“Develop a highly skilled workforce that earns higher wages and develops a global state identity linked to a product or service,” Okauru said.