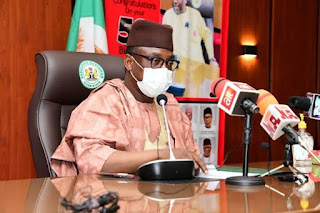 The Niger State Government has announced the suspension of all weekly cattle markets in the state, effective September 1, 2021, as part of measures to combat rising cases of armed banditry and kidnappings.

In a statement released on Tuesday, the Secretary to the State Government, Ahmed Ibrahim Matane, further stated that any truck transporting livestock into the state must display a Way-bill as well as proof of origin and destination.

The sale of petroleum products in Jerry Cans or any other containers at filling stations, as well as the operation of vehicles transporting firewood and timbers, were also prohibited by the state.

Motorcycles are only permitted to operate in Minna and its environs from 6 a.m. to 6 p.m., according to him.

“As part of measures to address security challenges in Niger state, the State Governor, Alhaji Abubakar Sani Bello has approved the following measures with effect from Wednesday, 1st September, 2021:

(I). All weekly cattle markets across the State are hereby suspended.

(Ii). Any vehicle carrying cattle into the State must show Way-bill and evidence of the origin where the cattle were purchased and their destination.

(iii). Sale of petroleum products in jerry cans or any other containers at filling stations in the State is hereby banned.

(iv). All filling stations should not sell petrol of more than N10,000 to each vehicle at a time and should be wary of vehicles or motorcycles coming for repeat purchases.

(v). Government suspends the operation of trucks carrying firewood/timber across the State.

2. Government is aware of the inconveniences the measures would cause the people, but the decision was taken in the overall interest of the State.

3. Government has condemned in strong terms the degree of carnage and mayhem Bandits and Kidnappers are causing to some parts of the State and reiterated it’s continued determination to rid the State of any security threat.

4. Government is calling on the people of the State to be very vigilant, security conscious and report all suspicious characters, movements or objects to security agents, adding that security is everybody’s business and that all hands must be on deck in complementing government’s efforts toward safeguarding lives and property of citizens.

5. Government has also directed security agencies to ensure effective and strict compliance/enforcement of these measures.

Secretary to the State Government (SSG