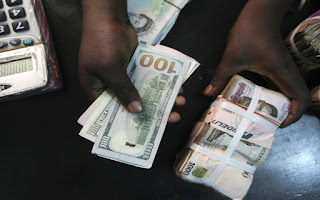 Monday, 7th February 2022: The exchange rate between the naira and the US dollar closed at N416.5/$1 at the official Investors and Exporters (I&E) window.

Naira depreciated further against the US dollar on Monday with a 0.04% fall to close at N416.5/$1 compared to N416.33/$1 recorded as of the close of trading activities on Friday, 4th February 2022. (adsbygoogle = window.adsbygoogle || []).push({}); Naira weakened on Monday despite the 84.8% increase in FX turnover at the official window.

Similarly, the exchange rate depreciated marginally at the Peer-to-Peer (P2P) forex market, trading at a minimum of N574.5 to a dollar on Tuesday morning compared to N574.27/$1 recorded in the previous trading session.

Also, Naira closed lower at the parallel market on Monday 7th February 2022, to close at N570/$1 compared to N568/$1 recorded in the previous trading session. This is according to information obtained from BDC operators interviewed by Nairametrics.

The exchange rate at the Investors and Exporters window closed at N416.5/$1 on Monday, 4th February 2022, which represents a 0.04% depreciation compared to N416.33/$1 recorded in the previous trading session

The opening indicative rate closed at N415.42/$1 on Monday, which represents a 9 kobo improvement compared to N415.51/$1 recorded in the previous trading session.

According to data tracked by Nairametrics from FMDQ, forex turnover at the I&E window surged from its 3-month low of $67.71 million recorded on Friday 4th February 2022 to $125.1 million on Monday 7th January 2022.

Crypto market on a rebound course

The crypto is set for a massive rebound as the industry market capitalization gained $69.96 billion on Monday to close at $1.98 trillion. As of the early hours of Tuesday, the industry had gained a further 33.6 billion to surpass the $2 trillion mark.

The movement in the market is largely due to the 3.9% gain recorded by the most capitalized crypto asset, bitcoin, which closed a little bit above $44k on Monday and has hit $44.87k as of the early trading hours of Tuesday.

Nairametrics earlier reported that investors are re-embracing risk assets across global markets as Bitcoin gains for a fifth consecutive day, the longest winning streak since September. Investors are going bullish on reports that reveal KPMG’s Canadian branch has provided its corporate Treasury with its first cryptocurrency asset allocation.

The crude oil market closed red on Monday, Brent, WTI, Natural gas, and Heating oil all recording a downtrend in their prices. Notably, Brent Crude having climbed above $93 per barrel on Sunday, dipped by 0.35% to close at $92.94 per barrel on Tuesday.

The continuous decline in the country’s reserve level can be attributed to the Central Bank’s intervention in the official market in ensuring the stability of the exchange rate. (adsbygoogle = window.adsbygoogle || []).push({}); Although it is worth noting that the decline has been very minimal in recent times, largely attributable to the rally in crude oil prices.

Nigeria’s external reserve gained $5.99 billion in the month of October, as a result of the $4 billion raised by the federal government from the issuance of Eurobond in the international debt market.