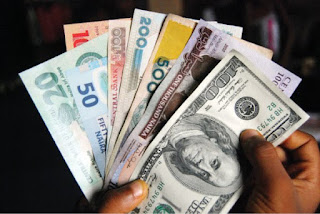 The exchange rate between the naira and the US dollar closed at N416.25/$1 at the official Investors and Exporters (I&E) window.

On the other hand, the exchange rate at the Peer-to-Peer (P2P) market appreciated to its highest level in a month to trade at N569.9/$1 on Thursday morning compared to N570/$1 recorded in the previous day.

Forex turnover at the official market dropped by 38.3% to $102.07 million compared to $165.3 million recorded in the previous trading session.

On the other hand, the exchange rate appreciated by 0.02% at the P2P market on Thursday morning, trading at a minimum of N569.9/$1 compared to N570/$1 recorded on Wednesday morning.

This is the lowest rate recorded at the P2P market since

Naira closed flat at N568/$1 at the parallel market, the same as recorded in the previous trading session. This is according to information obtained from BDC operators interviewed by Nairametrics.

The exchange rate at the Investors and Exporters window closed at N416/$1 on Wednesday, 2nd February 2022, which represents a 0.12% depreciation compared to N415.75/$1 recorded in the previous trading session.

The opening indicative rate closed at N415.5/$1 on Wednesday, which represents 32 kobo depreciation compared to N415.18/$1 recorded in the previous trading session.

According to data tracked by Nairametrics from FMDQ, forex turnover at the I&E window declined from $165.3 million recorded on Tuesday 2nd February 2022 to $102.07 million on Wednesday 3rd January 2022.

The CEO of the exchange noted in a letter to its Nigerian customers that the decision to restrict some personal accounts was to ensure user safety while more than a third of the affected accounts were restricted at the request of international law enforcement.

Meanwhile, the finance minister of India, Nirmala Sitharaman has proposed taxing income from cryptocurrencies and other digital assets at 30%. She pointed out that there has been a phenomenal increase in the transaction in virtual digital assets.

The crude oil market started the day on Thursday on the reds as Brent crude, WTI, and natural gas all printing negative growth in their prices. As of press time, Brent Crude dipped 0.23% to trade at $89.26 per barrel.

The crude oil market had traded bullish in recent weeks following the prolonged tension between Russia and Ukraine, inventory draw and reopening of economies around the world. The price of Brent had touched $90 per barrel the previous week, before sliding back to $89.26 per barrel.

In the previous week, the API reported a draw in crude oil inventories of 872,000 barrels after analysts had predicted a draw of 400,000 barrels.

The continuous decline in the country’s reserve level can be attributed to the Central Bank’s intervention in the official market in ensuring the stability of the exchange rate and the inability of Nigeria to meet crude oil production quota.

It is worth noting that the nation’s foreign reserve gained $5.99 billion in the month of October, as a result of the $4 billion raised by the federal government from the issuance of Eurobond in the international debt market.